Got back to the project today...

I stuck the clutch, pressure plate and bell on the engine probably a month or so ago, it took forever it seemed, to get the right clutch alignment tool. Don't order it from Jegs, they sent the wrong one, and have no tech specs on them to figure what is needed. I believe they sent me one for a I dunno, it fits my pilot bearing, but is bigger than the t5 input shaft.

I stopped on the project for bit, simply cuz I still needed a few parts and thought about figuring cheap or near free ways to get them, and then said screw it, just buy em and be done with it.

Got the trans itself installed to day: 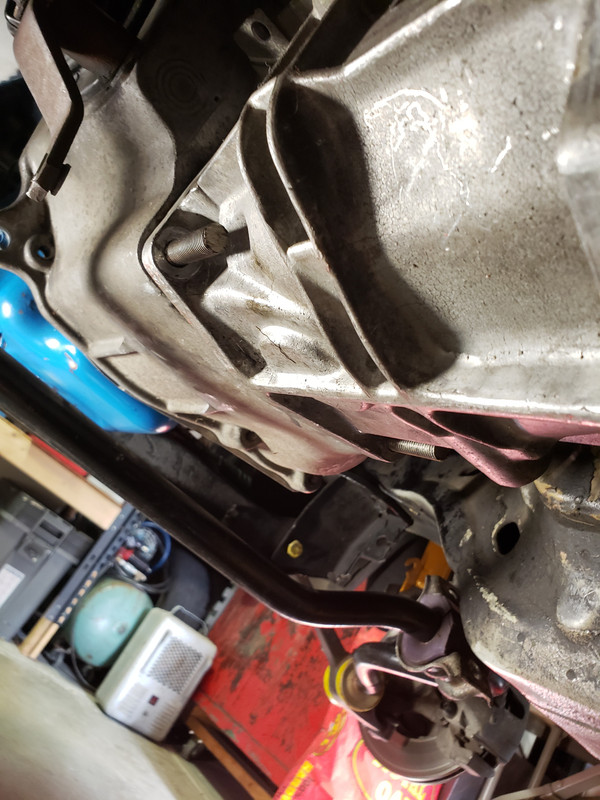 I used the all thread in the bottom holes to get things started after the input shaft was started. Then used 2 bolts in top holes to draw it up the rest of the way. Finger tight first to ensure most of threads in the AL bell housing so wouldn't strip em. In the future I think I will do this the way I did the automatics, which is with the bell on the trans. I just don't have the strength anymore to push 85 pounds around and line up the front over on the trans jack. 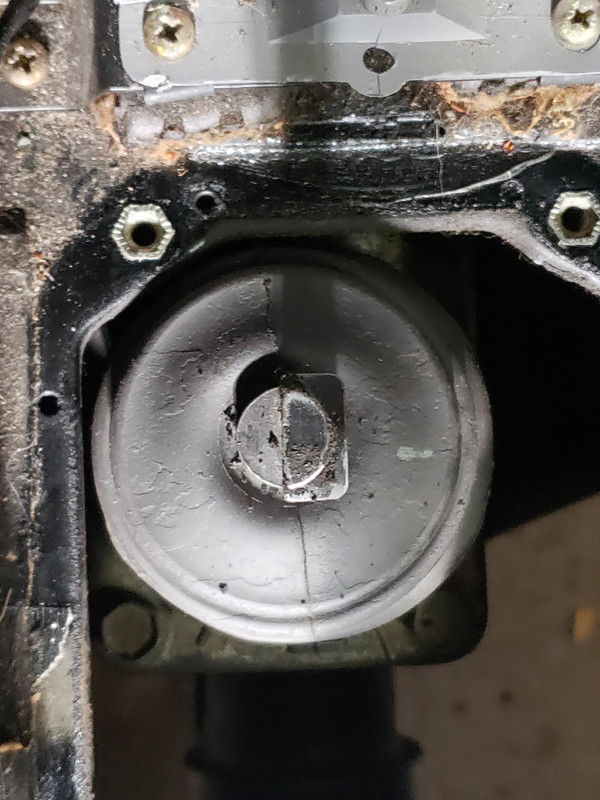 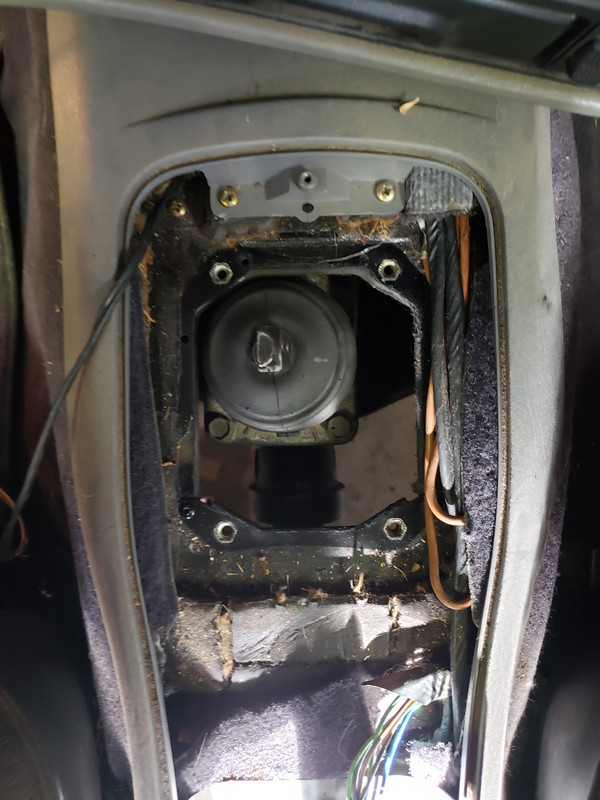 I don't think I'm gonna have to cut sheet metal here. My car is an early 86 I think. I have to look at my build date again, but it's like Feb 86. Anyhow Ghost said he removed a piece that was riveted at the front of the hole, and mine is already at the back from the factory, so I don't think I gotta do anything to enlarge the hole here. Will check again when I get the rest of the trans mount bolts tight, and line up the driveshaft. If I ever have to have the trans out again I might spend the money to get the Camarobird tailshaft, and housing this is really far forward, more than I expected it to be. But I guess that's what angled shift handles are for

I'm using the stock C3 trans mount turned around 180°, and the little adapter that Ghost made when this trans was in his car. 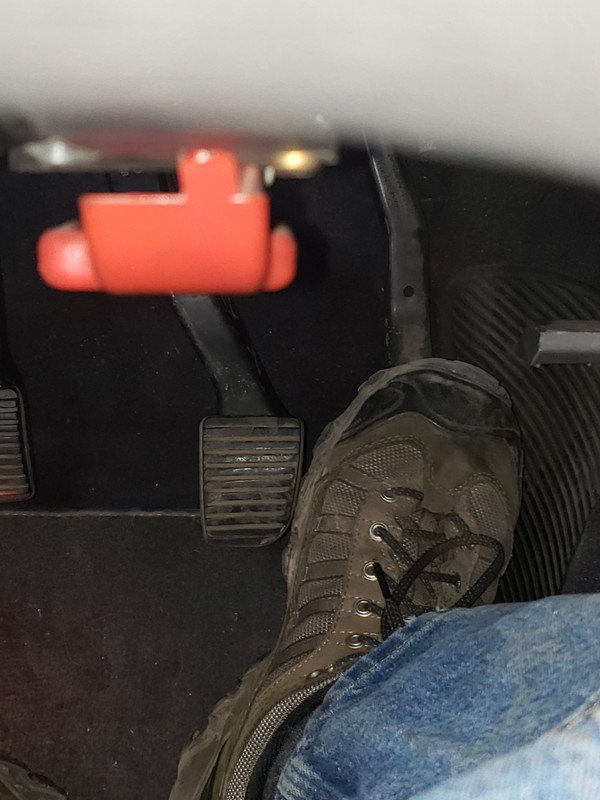 Wow, my brake pedal is high, like a whole inch plus above the gas, and my tiny 7 and half foot is so big that I won't need to worry about heel toe

I did take a brake pedal and clutch pedal from a manual XR, I think it was an 85. I did not reuse the sheet metal piece that wraps around the clutch pedal, as it seems rigid enough without it. Of course, if I have to take the brake pedal out to figure out why its so high, I'll put it in, I just couldn't get it in once the brake pedal was back in the car.
Johnny

Tomorrows goal is to try out the driveshaft to make sure it fits, and bolts up right. Crossing fingers as it's been nearly a month since I got it, and they didn't give me back the old one I took in. This one is entirely new it looks like, the tubes look bigger than the stock ones. The very least I know the rear section of the shaft is right, as I posted a pic of my old C3 driveshaft, and the new one side by side.
Johnny

I agree, this is helpful...One thing I would do though, put that wrap around part back on the clutch pedal assembly. They're somewhat robust, but I've seen some that are torn. It's a lever, and you're pushing a lot of force on it repeatedly, over time it will fatigue. Even some have reinforced the pedal box and original welds. Just my opinion/thoughts....
Top

This one's getting close.
Having this back on the road would be a heck of a Christmas/New Years gift.
Here's to completing the project with no issues!

eaton53 wrote: ↑
Sat Dec 21, 2019 2:13 pm
This one's getting close.
Having this back on the road would be a heck of a Christmas/New Years gift.
Here's to completing the project with no issues!

New Years is the goal for at least mobile under own power. We'll see about smog test, I'm waiting on a free euro surround, and I gotta fab a dummy shift handle to get an idea of what I wanna get. Emissions once I get done will be the next big hurdle, as I was already having issues with passing smog. The C3 was giving me grief right before this trans landed in my lap, so I decided to rip out the C3 since it had to come out to get looked at anyhow. I don't foresee driving the car enough to justify keeping the C3 or going to an A4LD like I had once planned.
Johnny

Drive shaft is in the car and fits, I have probably just over an inch of pull out, but not bad at all. Now I just have to look at the drive line angles to make sure I have everything right. I need to make sure I have 5mm shims between the center support bearing and the body, then I gotta double check the angle of the front shaft. I'm more than likely gonna need to get a new trans mount isolator(whatever the big rubber bit is actually called) and then check it again. It seems like it sags a lot, and I dunno when(if ever in the 26 years I've owned the car) its been replaced. 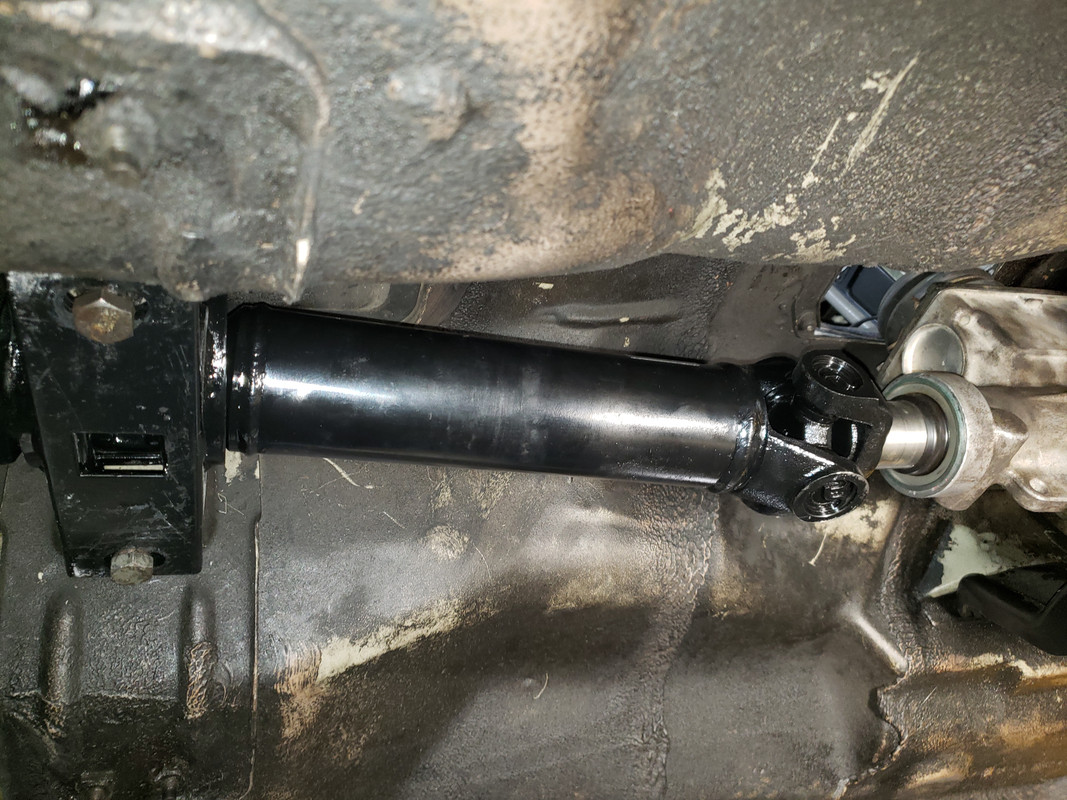 Drive shaft in, really difficult to see in this photo, but the nose of the driveshaft is pitched down by at least 4° or more. Definitely not gonna work. 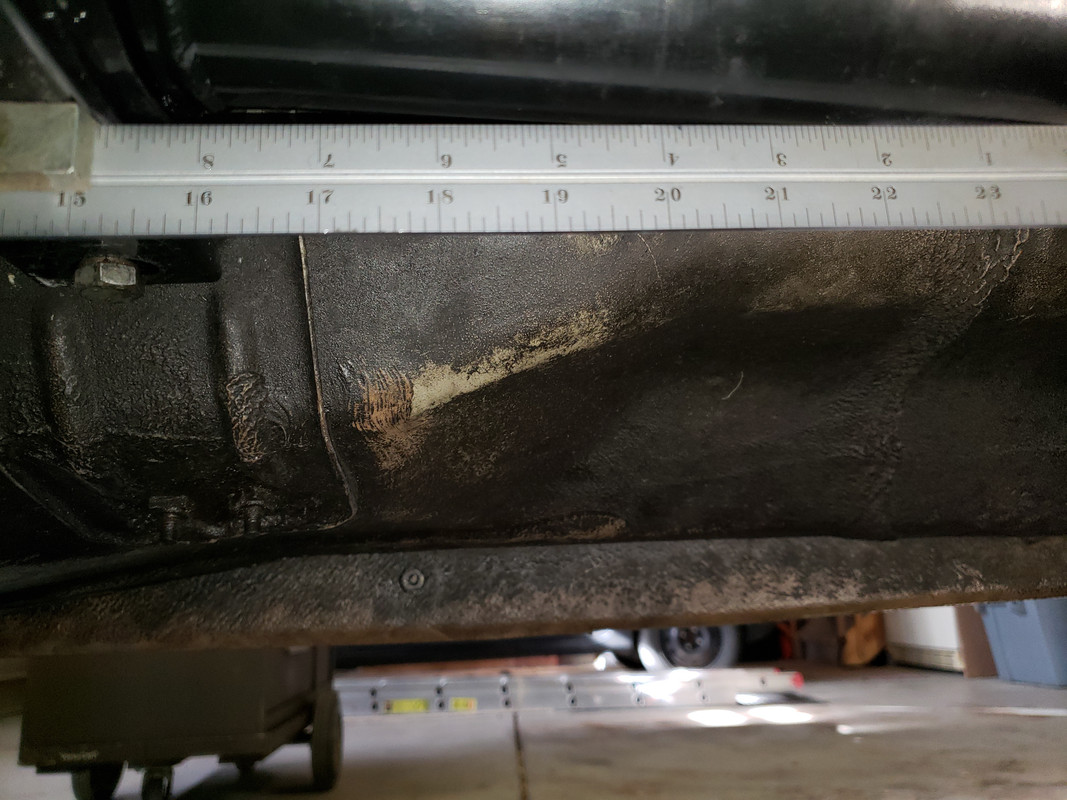 24in scale held to center support bearing with rare earth magnets to illustrate the angle of the dangle. 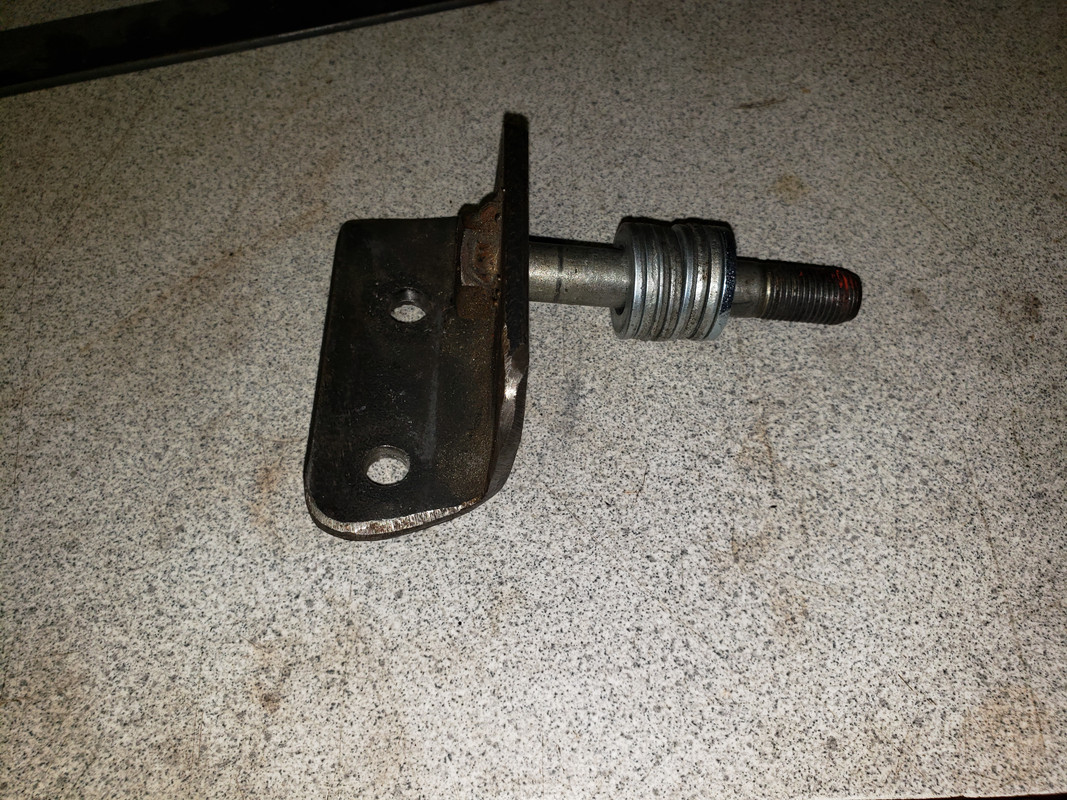 Adapter and shims for mating T5 to XR trans mount. 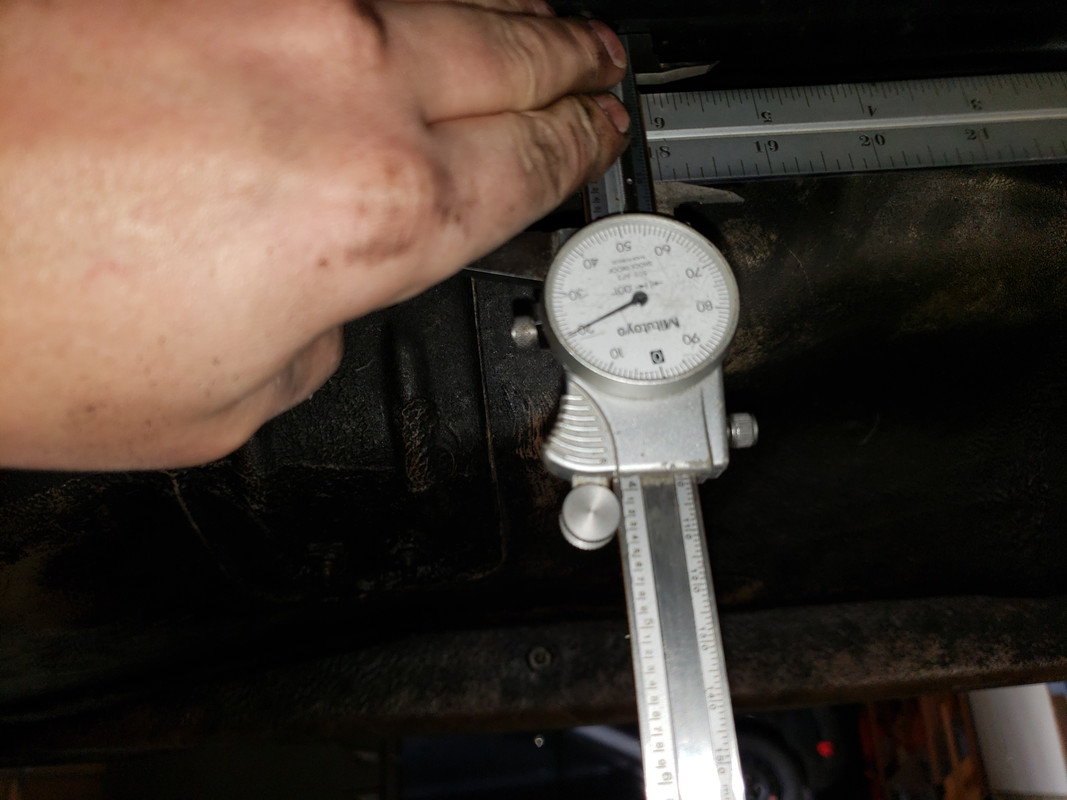 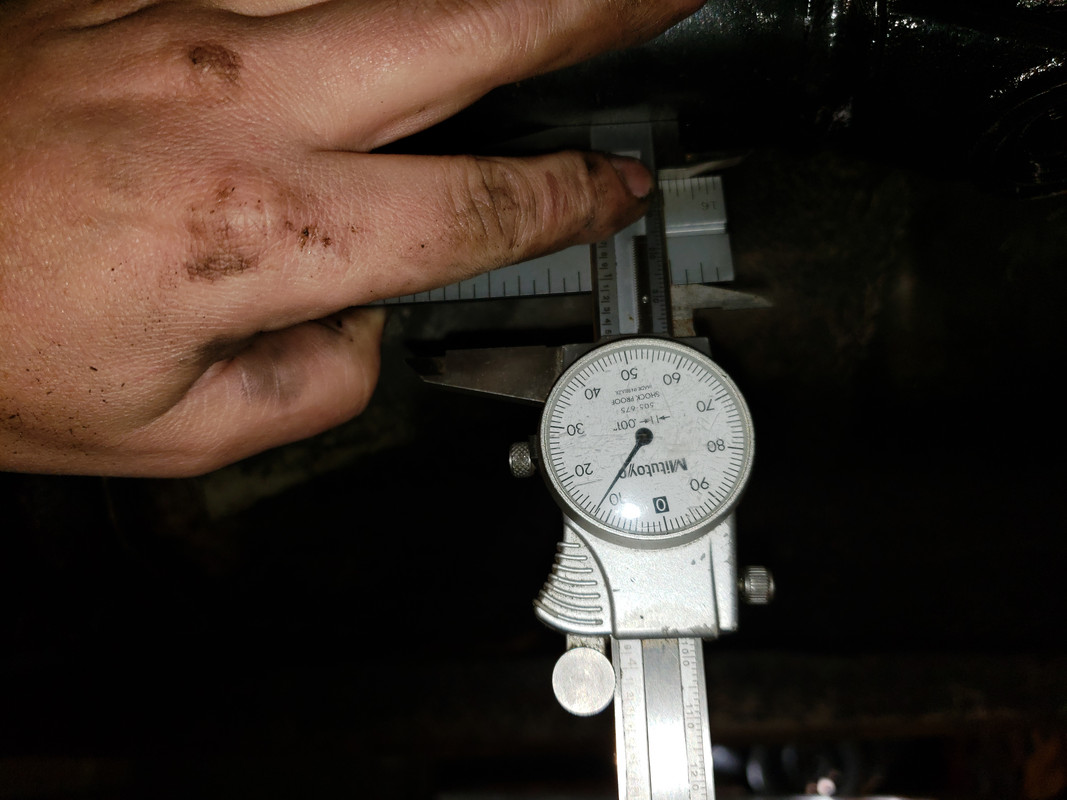 Showing how much difference I have from the rear of car to the front. I had it nearly 0° with the trans being supported by a jack. I dunno if 0° for the front shaft is what it should be or not. However... 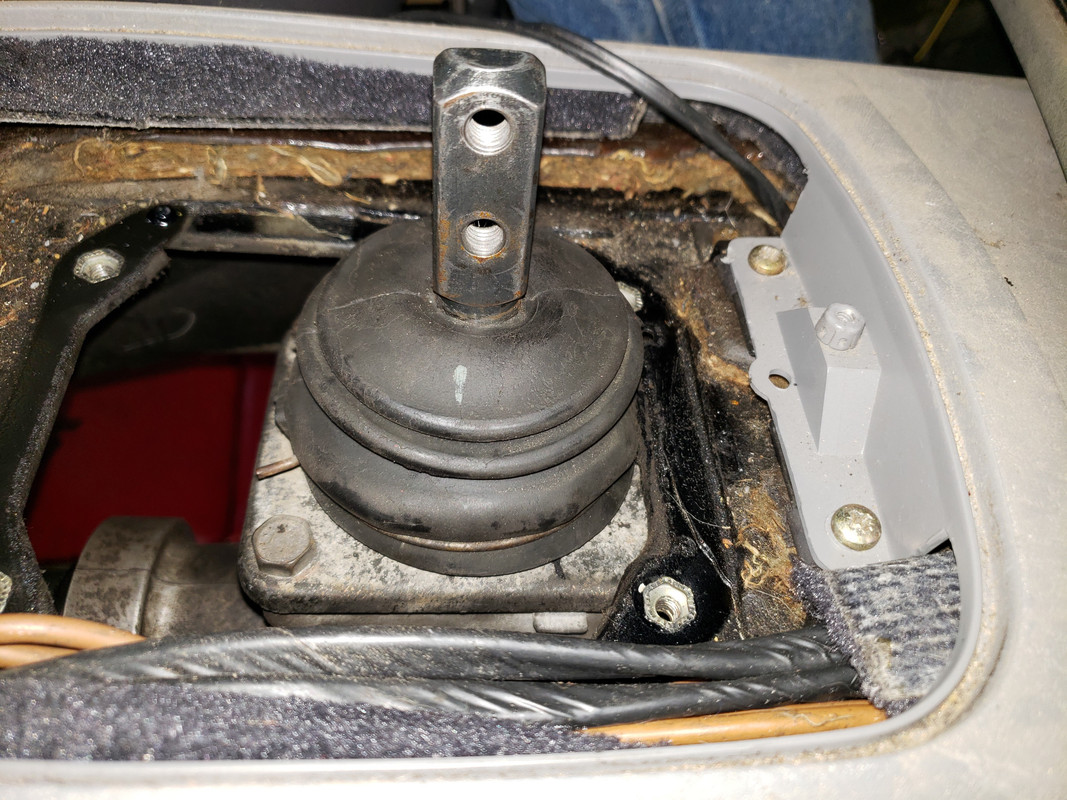 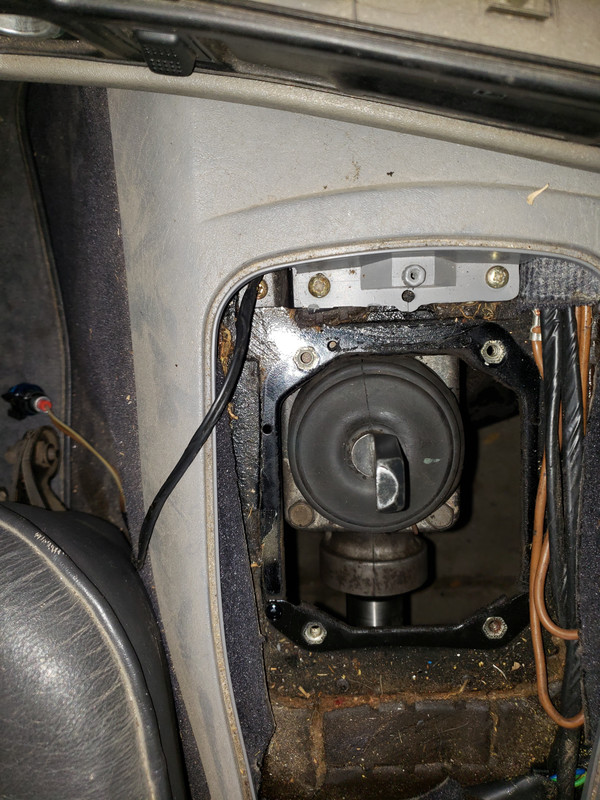 This will not fly at all. It looks like I really will have to cut sheet metal here unless, I decide to eliminate one cooling hose and re fab the engine mounts to shift everything back a half to 1 inch. The boot will get sliced by the sheet metal after awhile, and we don't need that happening. I'm almost tempted to just take the trans out, and get a Camarobird tail shaft and housing for it, but I dunno if really wanna add a ton more work to this project. Not that moving the engine and trans rearward up to an inch is an easy task either...
Johnny

One thing I'll mention: I found fitment of the T5 similar in my 11/85 (IIRC) '86 XR, but I cut the floor of the car anyway. Putting fluid in the T5 through the fill hole is a royal PITA, but it can be done easily by removing the shifter and pouring it in. That was valuable for me, so I removed enough metal from the floor to facilitate that.
Top

Gotta pull the 4 bolts to fill thru the shifter, and not just the boot eh?
Johnny

Yeah, the whole shifter comes off.

You might also find you want to replace the shifter itself. The stock part isn't great, and a good aftermarket will change the feel of the whole gearbox.
Top

I've been thinking about that simply cuz the stock one doesn't have stops, and it could be possible for someone less than skilled with the manual to band the forks if they aren't paying attention or just get ham fisted with it.
Johnny

Yeah, I had never touched a T5 before I put one in the XR 12 years ago, but someone here gave me that advice so I bought a Triax first thing. Spent more on that than I did the whole gearbox.

Now, having driven stock shifters I have no regrets. The Triax changes the whole thing. Totally worth it.
Top

That driveshaft I had modified, or maybe more accurately fabbed, cost more then the trans did for me. Of course so did the clutch pedal spring that Herson sent me

thesameguy wrote: ↑
Sun Dec 22, 2019 1:07 pm
Yeah, I had never touched a T5 before I put one in the XR 12 years ago, but someone here gave me that advice so I bought a Triax first thing. Spent more on that than I did the whole gearbox.

Now, having driven stock shifters I have no regrets. The Triax changes the whole thing. Totally worth it.

Any chance you have pics of how that Triax looks in the car? Maybe even some with the boot off? I assume it came with the handle? That's how I interpret the ad on their website.
Johnny

This was back when it was originally installed: It does include the lever part, which isn't shown. It does not include a knob - just a threaded nub on top of the lever.

I ended up using an 8 Ball shifter from Kragen as a short term fix, but it's still there all these years later.