Good advice. I'm glad I live in Ohio and don't have any current issues, though I do feel your pain when it comes to e-check. I never thought about contacting my own car insurance if someone hit me while I was on my bicycle, interesting. Though I don't imagine that ever happening since I don't like to wear down the knobbies street riding around.
"Let me go get the keys to your brand new Hyundai!" Nooooooooooooooooooooooooooo!
Top

It's not something most people would think of, but you learn a lot doing IT for law firms for a decade.

I've been following your project, did a similar one last year but was a t-9 to T-5, still trying to sort out a noise on decel! Have had some issues with the clutch linkage "dogbone" When you can i would appreciate it if you could post some completed pics of the install including the clutch linkage.

JimG wrote: ↑
Wed Mar 25, 2020 2:04 pm
I've been following your project, did a similar one last year but was a t-9 to T-5, still trying to sort out a noise on decel! Have had some issues with the clutch linkage "dogbone" When you can i would appreciate it if you could post some completed pics of the install including the clutch linkage.

Agreed, this would be good/nice!
Top

I need to be better about posting pics. I thought Ida been on lockdown these last few weeks, but because most of our clients are DOD contractors of some sort or another we got to be essential. I took today off of work to make a 4 day weekend so I can work on the car some, and then figure out the process for getting that next temp tag. Drivers license offices opened here by appointment only, but no word on the county clerks offices(where i would go to get tags). Supposedly there is an online process due to this pandemic, but I doubt it's gonna be fun since my last temp tag expired nearly 3 yrs ago.

milehighXR wrote: ↑
Fri May 22, 2020 1:06 pm
I need to be better about posting pics. I thought Ida been on lockdown these last few weeks, but because most of our clients are DOD contractors of some sort or another we got to be essential. I took today off of work to make a 4 day weekend so I can work on the car some, and then figure out the process for getting that next temp tag. Drivers license offices opened here by appointment only, but no word on the county clerks offices(where i would go to get tags). Supposedly there is an online process due to this pandemic, but I doubt it's gonna be fun since my last temp tag expired nearly 3 yrs ago.

I think you could probably just run it. If and really IF you get stopped, just say that you couldn't get tags. Then you know you'll need to get tags.

Interesting that I'm see a bit of new cars around me in my daily journey's with simply no plates or anything....Assuming its due to the offices being closed as well.
Top

I finished the '86 transmission rebuild/reinstallation and had it running well, took it to an inspection station in MO and passed insection in early April. The tag agencies in MO were closed until the 20th and I was ready to do paperwork before the 13th...

I left the car in storage without tags, drove home and waited to get renewal in mid May. That four weeks time lost sucked but it was necessary.

I see vehicles with expired or no tags occasionally on the streets around Tulsa area. It amazes me at times how old and out of date tags might be. I have lived a multiple states and in the course of doing so I have had cars registered in six different states. One thing I notice is out of state plates when sitting or driving in traffic with those cars. Examples: I was sitting at a light by the Galleria in Dallas in 1989 and a Mustang with MO plates was in front of me. The tags had been expired for five years; 1984 plates. I was sitting in traffic in a Raleigh suburb and a Volvo in front of me had MD tags that were three years dead. I don't think police look at out of state tags for expiration unless stopping the car for some other reason. I look at temporary and regular tags around me all the time as a part of situational awareness. You might find this to be a fun game for yourself. Watch tags around you for a week and see how many are wrong somehow for expiration of normal or temp tags. It is good for fighting boredom at lights...

I noticed when the people near me got a new car, I looked at the rust on it, the budget auto sticker, and the temp tag. DMV/BMV has been closed (though it is opening soon) and their temp tag is so old now you can't even read it. I see all kinds of people driving around like that now (totally legal) and wonder when they will start having problems with the local law enforcement. Good to know I'm not "that guy" I'm just practicing situational awareness.

I figured I'd have to drive her without tags a for a minute or nine anyhow, simply because I need to diagnose the rich running/high HC that I was having at the last failing smog in 2017. I'd just prefer to be legal about it, as murphys law will kick in if I try to take advantage of the situation I'm sure

I see expired temp tags all the time around here, even before this. Usually only a month or so past due. Our temp tags are really good now, laminated so they're water proof, mounting holes in them so you aren't "supposed" to be putting them in the back window anymore, and the last one I got has the vin, make, model, and color, of the car it belongs to on it.

Back to topic, I said I'd get pics on friday night and I kinda got busy with other stuff. Hopefully laterer today I get some posted.
Johnny

Pics of the clevis I made for the shift cable. I had one of 2 required, so I had to make the 2nd. one. I coulda done it at work, with the CNCs, and all that, but I decided to go "old school" and use what i had on hand. Including piece of mild steel that I had laying around as a drop from a previous project(don't remember what though). 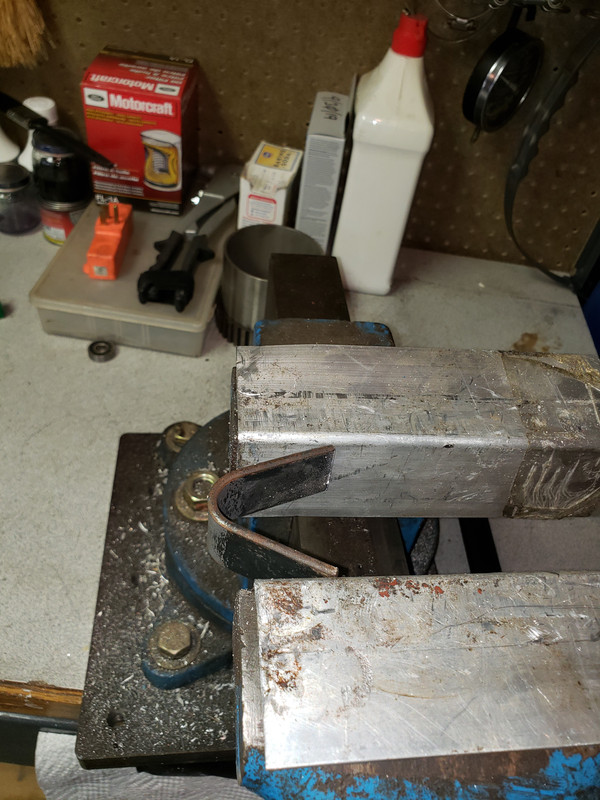 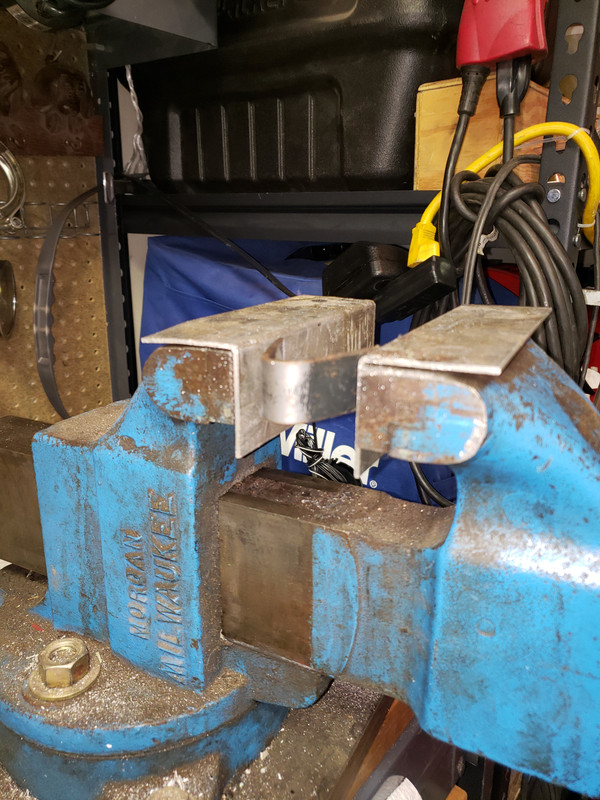 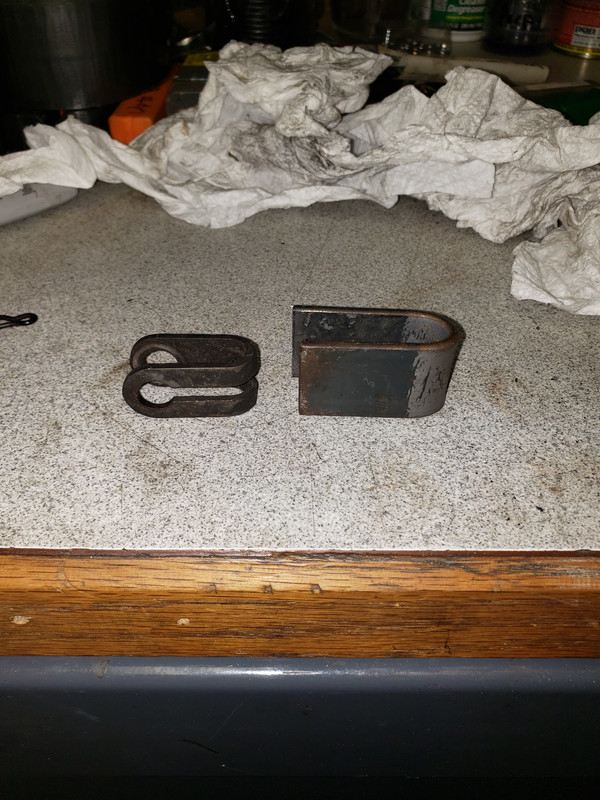 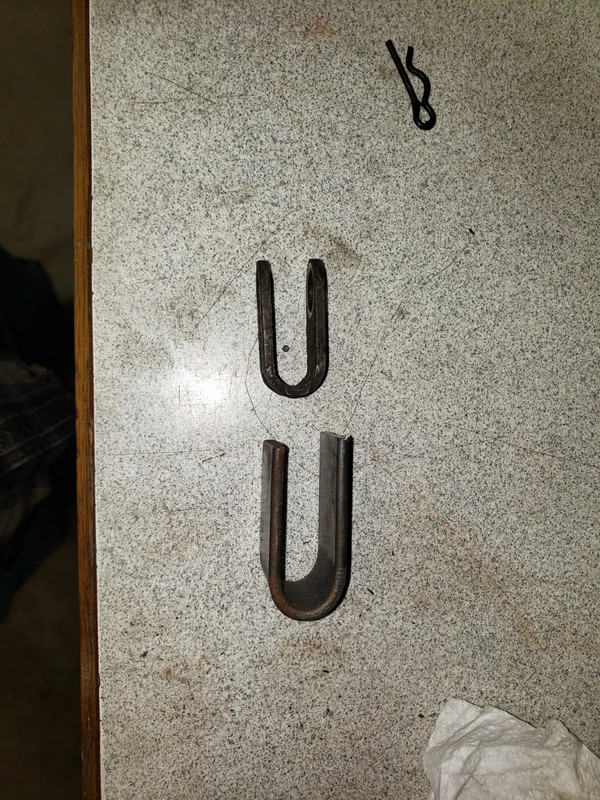 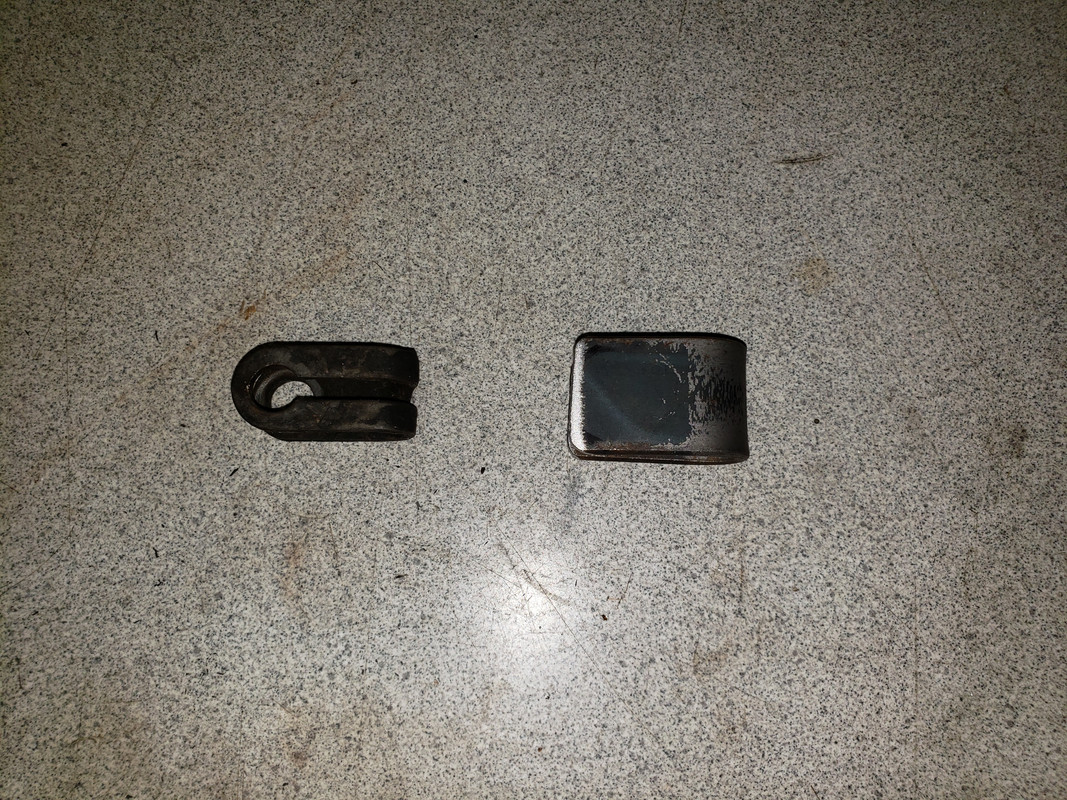 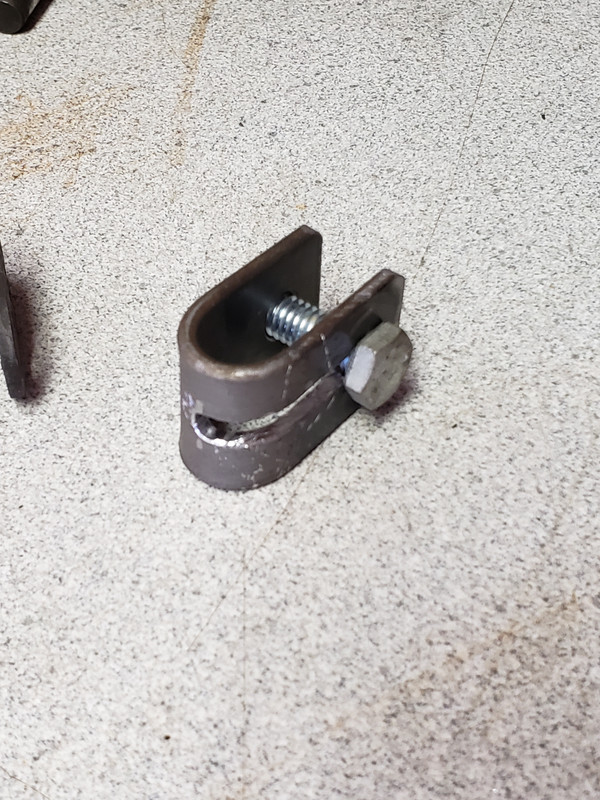 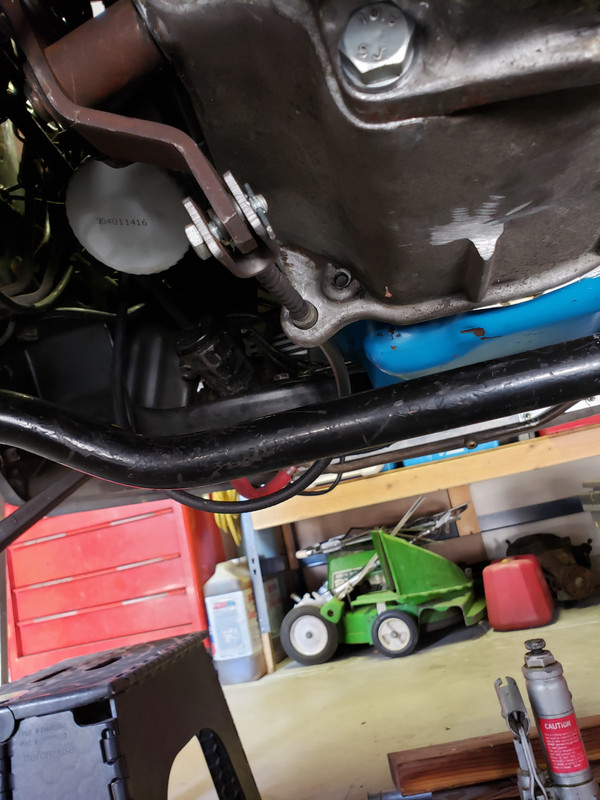 More pics and such laterer, I gotta go fix the a/c in the Fiesta now. It suddenly will not blow cold unless it below 80°F outside. It is alteranting between a little cold for not long at all to blast furnace hot when over 93°F outside, and I really do not like hte way the Ford service manual for that car is organized in comparison to the XRs...
Johnny

Looks good! I see that you have a direct pull bellhousing, where did you get it and what year car is it from? I have the one with the dogbone cable and would like to get rid of it..
Jim Gosses
86 XR4TI, 165K, T-5, IC, RR, PBR Fronts, T-bird Rear Discs

You'll have to search google or see if Ghost chimes in. I got the trans mostly ready to install from him. The only things I had to source were the driveshaft, euro shift surround, and the clevis that I made, cuz one was missing. I still have to come up with a shifter handle, but I'll make that at work. I had found a nice looking piece of SS that looked like it might polish up real nicely. I just gotta put a flat on it, add some holes to bolt it on, and tap the inside of the shift knob I got.

Other than the shifter handle, I think all I have left to do is make sure the bolts are all torqued, and then I can make sure everything seems peachy and take her out for spin. Then its off to figure out smog, and then fight with the license plate folks to get her legal again. I'm expecting to be driving her by the early fall. Once she has a permanent tag again I'll figure out what it's gonna cost to get the body work done.
Johnny

Up front? If that's what you mean yeah. It bolts up where 2 of the sway bar bolts go. My dads 86 has one, and the 85 I parted out years ago had one too. I dunno if they all were supposed to have them and some folks/shops just never put them back not knowing what they were for.


Now you got me wondering if I put it back...

On a positive note, I did make a shifter handle at work this morning, pics after I get it in...
Johnny

re: the stiffening bar. After talking it over with Nigel (Drakenet), seems its functionality as any kind of chassis stiffener is minimal. I don't know if the stock RS's came with them in the UK, but they leave them out in all the racing setups. He's always left it off when building RS's, so I pitched it when I converted to the compression strut front suspension.

That said, I've been thinking that with the 5.0L, it's not a bad idea to have some more chassis stiffening, especially for frame-rail twisting. The stock bar probably helps a bit with lateral movement between the rails, but does nothing to prevent twisting. If I get the chance, I'll build a couple of brackets out of angle-iron to weld to the frame rail (two surfaces), and make a removable, gusseted stiffening bar to bolt across the tunnel to each.

It'll probably be a bent bar of sorts to clear the trans. The unibody's tunnel sheet metal probably adds decent torsional resistance between the frame rails, but this should improve that significantly. Though, I suspect the FMS guys probably didn't bother with any kind of cross-bar because the seam-welding and full cages would be enough, and unbolting/bolting a cross-bar would be another time-consuming step in servicing the rally cars.

Kinda' like my CV joints, where they deleted every-other bolt, and installed locating pins, so each CV is bolted in with only half the stock number of bolts. Guess when you're scrambling for repairs, every little thing that saves time is critical. Then again, it's probably justifiable only if you're constantly tearing down and servicing, not leaving it be for a few thousand miles. Found that out when I checked them after rebuilding the CV's, and most had backed out quite a ways. They're now torqued down heavily, but I still check every few hundred miles.
Top
Post Reply
124 posts