Documenting your big project with photos/videos? Have photos/videos to share of anything Merkur related? Place your links to photos and videos here. Please - Merkurs and Merkur-related pictures only. Cosworths welcome!!
Carlisle and event related pictures are to be placed in the relevant section under 'Events'.
Post Reply
586 posts

Im diggin the nissan datsun flares. Do they give you about 1.5" more clearance? I can't wait to install my Outcast set.
Top

about 1.5" in the rear, and a little more up front. I was more aggressive up front as the car sits with a little rake.

Could you give me some line logic on the coolant pathways you created. Assuming T-stat closed for simplicity.

Does this make sense? last line (3/8" to bottle) is the same line (junction) You can kinda see it in the images below. trying to simplify as much as possible. I know you got rid of the lower intake. 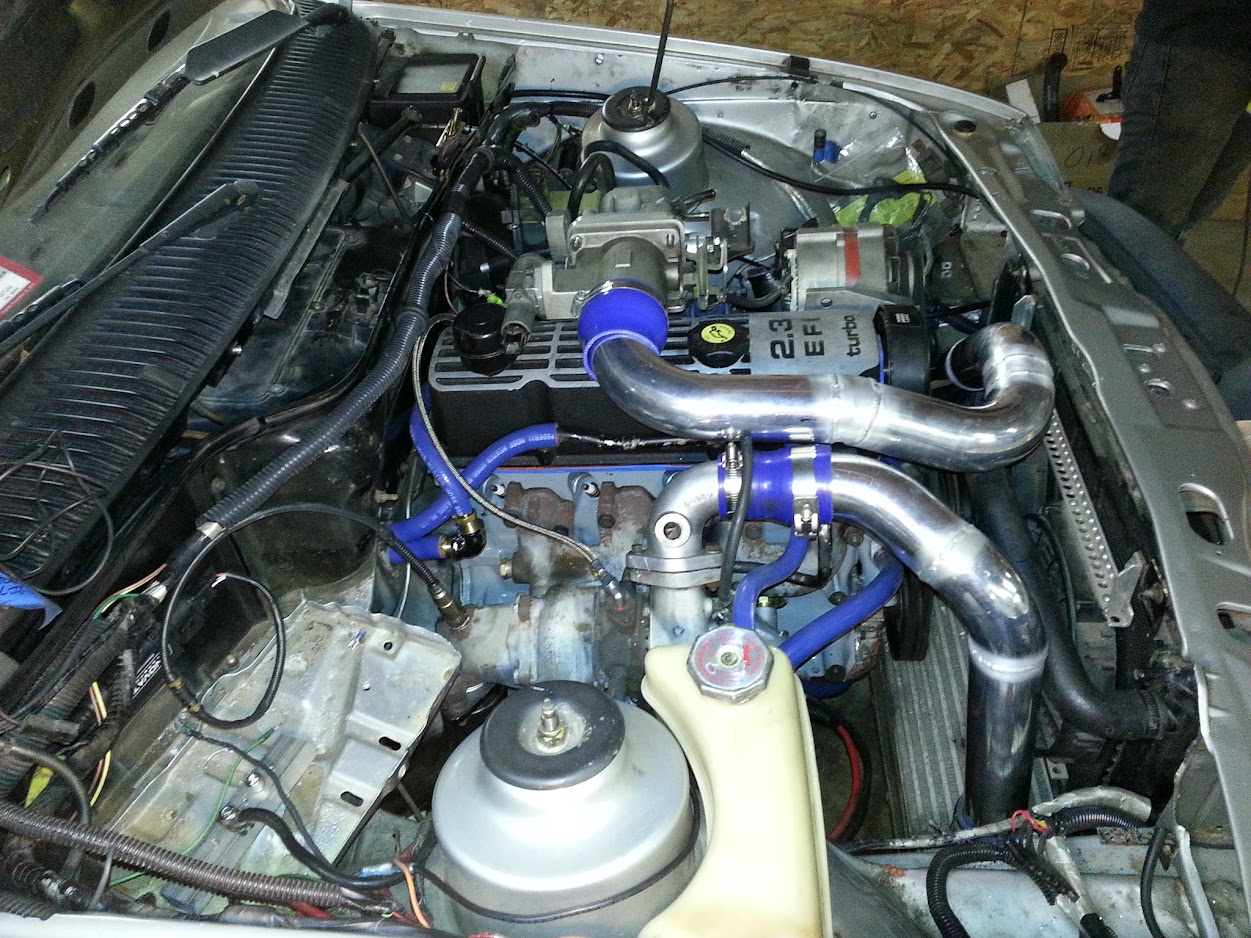 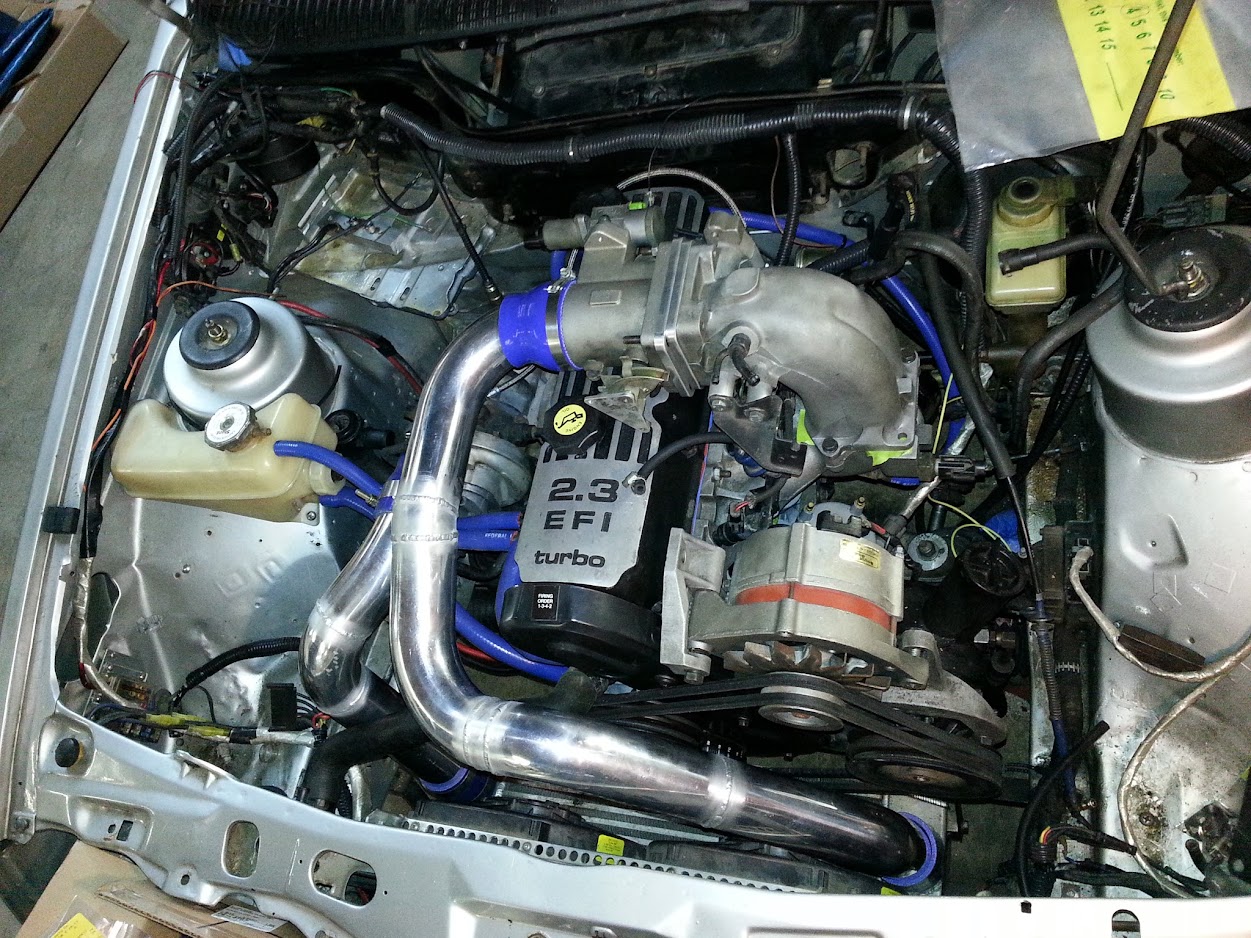 Sure. What i did was remove as many lines as possible. My car isn't driven on the street, so i removed... almost everything. I removed the water from the turbo (oil cooled only), and use proper cool down times on the turbo itself.
There is no heater core, nor oil preheater (oil cooler) on the filter. I have only 2 non radiator coolant lines on the car.

The radiator lines are -16AN, and yes, it hurt (but only for a second) to cut the fittings off the rare C&R radiator and tig some AN fittings on there.

Overall, the system is EXTREMELY simplified but it's like that for a reason. 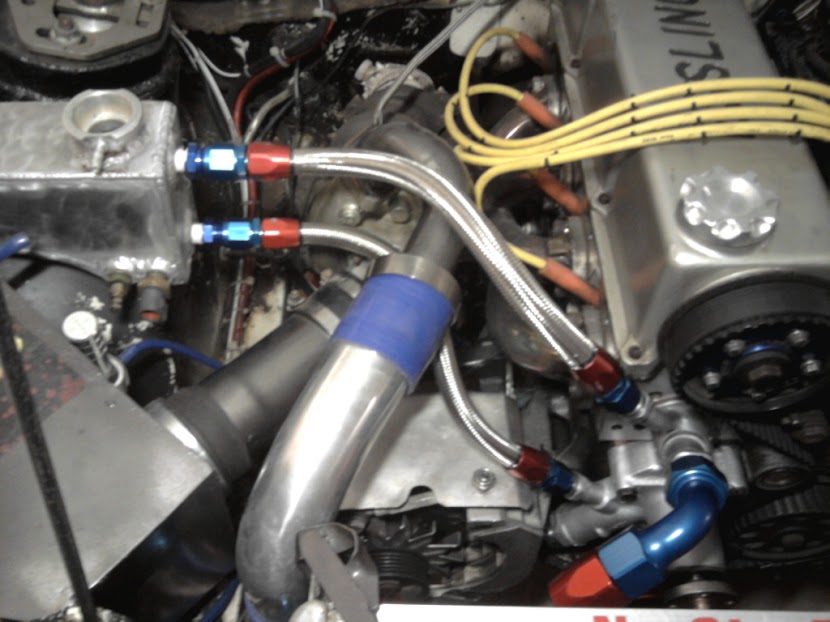 Lower intake is out to bottle - so that goes to what looks like heater core in, then h-core out to manifold along V-cover to bottle. It looks like- without removing the lower intake - (possibly oil preheater, cant tell in the pics as it shares that line), turbo, and heater core - that your setup is about as simple as it gets. The reason i went the route i did was for a few reasons - i wanted simplicity. I didn't need any creature comforts. Less lines mean less weight - and less money as those fittings are bling money - etc. I think i had about the exact same setup as you for several years - with really no major issues.

Gotcha thanks. That is about a simple as you can get. I like your sensor locations, makes everything so much easier not to have to deal with the intake junk. Luckly I'm deleting the oil warmer and heater core valve. That is almost half the lines right there.

This weekend I hope to start and finish some hard aluminum tubing for the lower radiator hose. Check back on my thread to see what you think... if it works out. I'm hoping it will be a little cheaper than your nice AN fittings and be as reliable.
-Paul
'85 Merkur XR4Ti
K20, VW mk2
'89 K2500, 6.0 swap
'00 Honda Insight
Top

Update - pics in a few (making dinner for the kids, have 7 minutes for the pasta to cook)

Make that 5, just had an issue.

Car is going to be different.

So i had a few questions thus far - - "how was the opener?" Well, it's hard to tell. It was cold out and the tires couldn't get heat, but my gut reaction is this, and can be summed up by a friend who was also driving my car, and who also is a much, much better driver than I... And he's used to high horsepower cars...

"The car is absolutely terrifying when the boost comes on. Can I go again?"

The fact that i changed everything doesn't help but... the car pulls further into the rev band. You can adjust angle with the throttle. You can pitch the car sideways while going straight (ie; more power), the bilsteins are friggin' awesome and i didn't notice the porpoising that i had with the konis. There was more feedback, easier transition thru the steering wheel than before; the car is easily slidable, but controllable. My fastest time of the day was not too far off FTD (i had to leave early anyway, and my belt tensioner committed suicide), but anyway, the fastest time was literally on the edge of traction the entire run. I quoted "i'm going to go pick a fight with physics" before my run. There was probably another second in the run but... well, my quote came back to bite me as the tensioner threw in the towel. I'll mod that design before the end of the month.

Overall, i'm extremely happy with the results - the car is tighter, faster, more powerful, easier to control when you exceed traction, and i'm out of time and have to go pull the pasta off the stove. Pics later.

Yeah, if that isn't the quintessential Merkurista post, I don't know what is!

John Brennan wrote:Yeah, if that isn't the quintessential Merkurista post, I don't know what is!


This describes most of the threads here and why we all love the car.

Excited to see this thing in action Ray. Lets get some tuning in soon too.
Joe
1985 Nimbus Grey XR
2017 Ford Focus RS
Top

Few pics from members only. rest at cartct.com
Some are from a co-driver for the day.

Had to clearance the front bumper brackets a little more.

The car's power has been opened up to a broader rpm range - is this just the turbo or the IM? I'm going to say that it's a combination of both - the stock intake manifold, as we know, even in gutted state, limits top end flow; however i think that the biggest bottle neck was the stock cold side turbo.

For those that TL; DR - current turbo setup is

Ray, what size tires and wheels are you running? Did you have to clearance the cladding aft of the front wheels for turning? Did you flare the stock fenders up front as well?