Yet another LS swap

Documenting your big project with photos/videos? Have photos/videos to share of anything Merkur related? Place your links to photos and videos here. Please - Merkurs and Merkur-related pictures only. Cosworths welcome!!
Carlisle and event related pictures are to be placed in the relevant section under 'Events'.
Post Reply
26 posts

Yet another LS swap

Where to start? I've posted some pics to Facebook, but some friends who aren't on it asked me to post the swap here. Years ago (2007-ish) I started a 3.8SC swap, had it mounted but ran out of money to actually build the motor, got divorced, life got in the way etc. I learned one lesson - DO NOT start a swap unless you have the motor built and ready to go! all the little crap after the motor is mounted will be enough of a headache. I ended up selling almost all of the 3.8 stuff and started (slowly) gathering parts for a 4.6 DOHC swap. I ended up building a fairly potent 2.3T with a BoPort 2.1 cam, AEM standalone running an HY35 and E85 on almost 30 psi using the leftover T56 from the failed 3.8 swap to "get by" while gathering parts. I soon found out that the mod motor parts were not only obnoxiously expensive, but very model specific and in some cases very rare. I decided to say "F-it" and turned to the most common swap platform aka. the LS architecture. I picked up an LC9 (aluminum gen IV 5.3L) long block with 120k miles and a collapsed AFM lifter (very common issue) from craigslist for $400 in February of 2016. I was specifically looking for that motor because it comes with the 243 heads (same as LS6), the stronger gen IV rods and flat top pistons. Waaay more compact compared to the 4.6 and one of the goals was not to hack up the car or beat the sheetmetal into submission. Of course the bastard Murphy happily jumped in and threw a wrench in the works - I got injured on the job, was forced to retire medically, split up with a GF of 5 yrs 2 months before proposing, got a new GF, a new baby and a new job all in a span of 1.5 years. Been a bit busy, lol. The LS sat in the garage gathering dust until I was able to finally start working on it in November of last year after cracking the inlet port of my ported 2.3 head (I'm guessing I opened up the intake a little too much). I've mostly been working on it on nights after work since life with a toddler is a busy affair! Hence the somewhat slow progress...

Here's some pics of the motor compared to the 4.6 dohc to give you guys an idea of the size difference. The LS came out of a 2007 Suburban, probably driven by some soccer mom judging by the amount of sludge inside. I wonder what the oil change interval was on this sucker!

Motor after bringing it home: 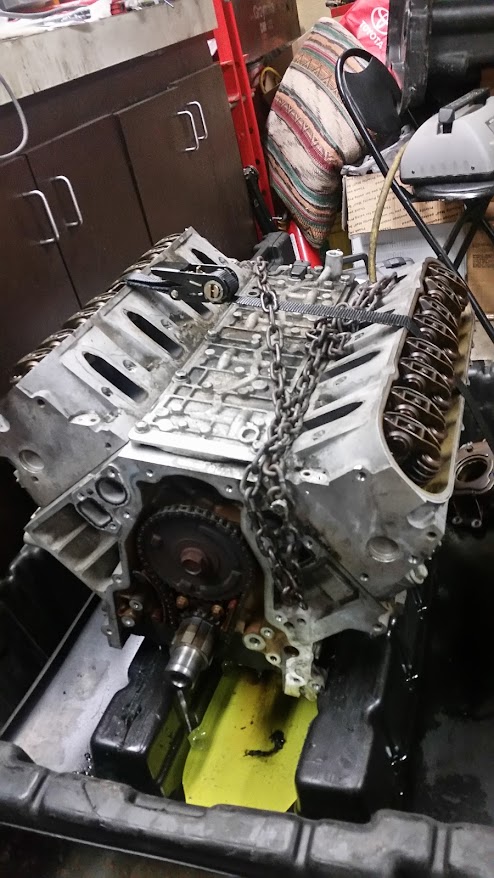 Size difference to the 4.6 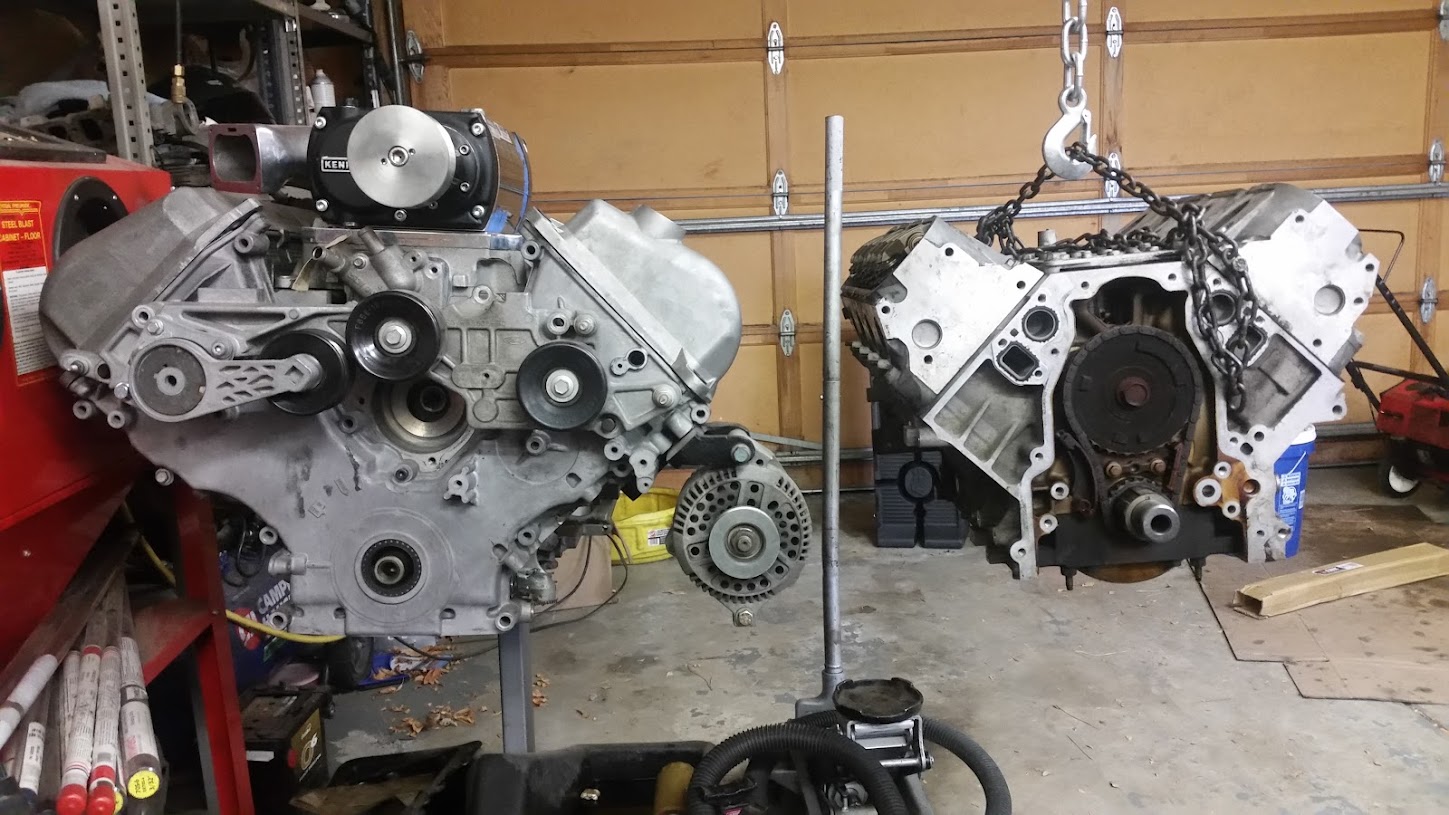 All the lovely sludge buildup: 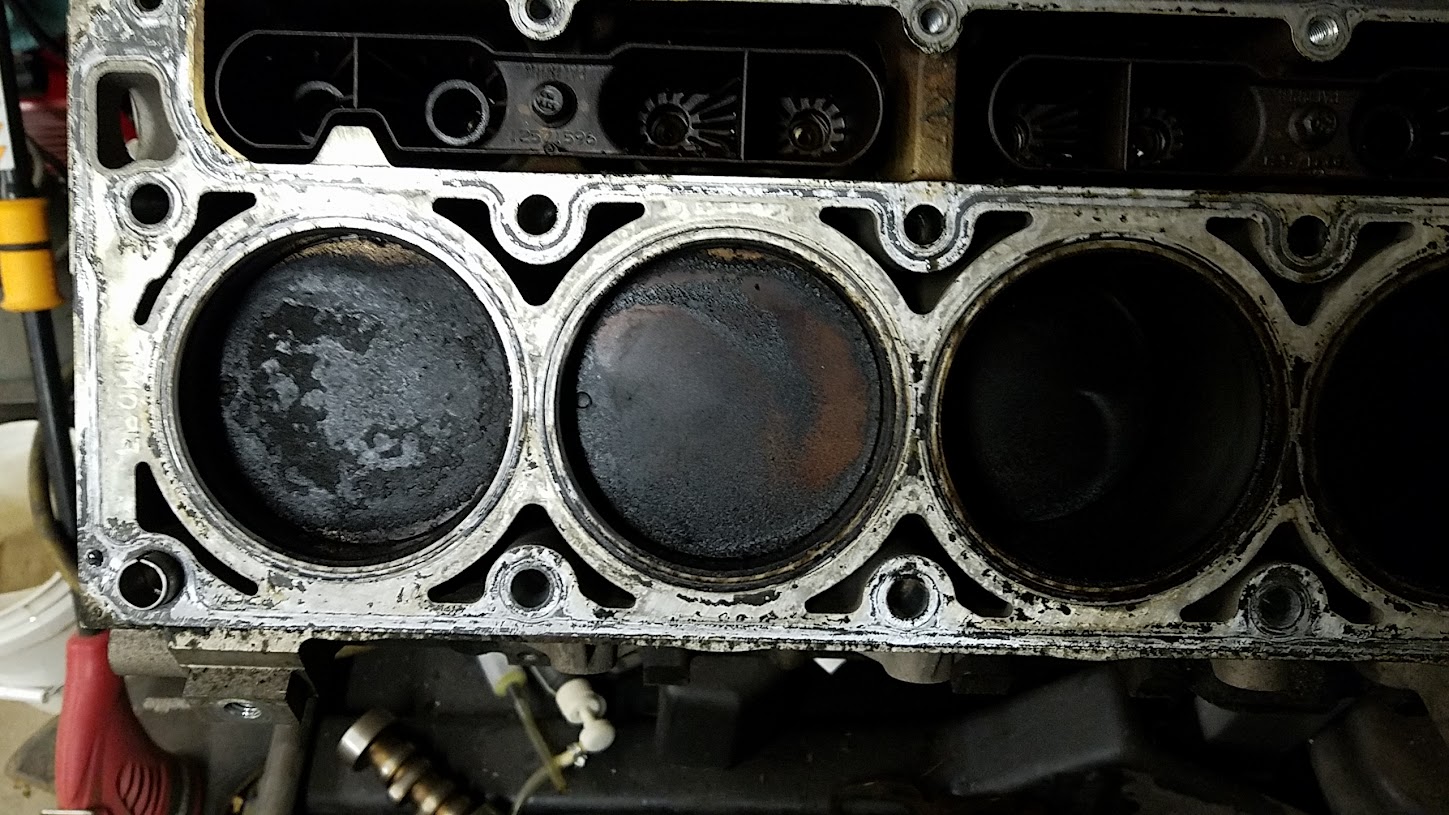 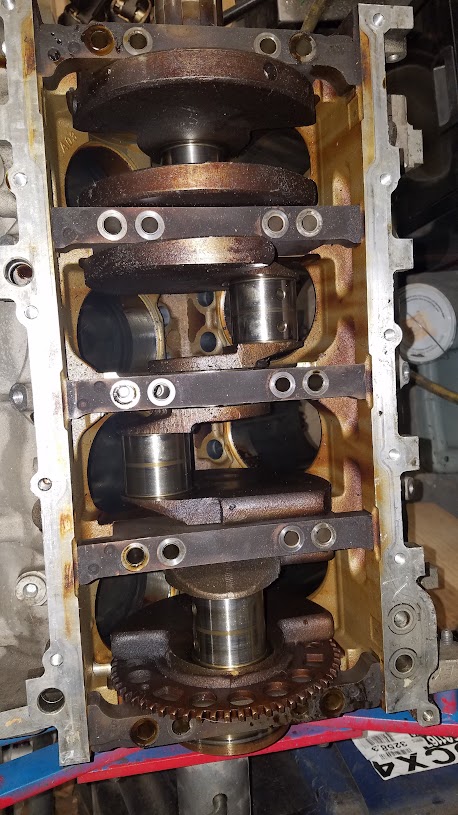 I decided to rip the motor apart and freshen it up.
Pistons as they came out and after soaking in Berrymans Chemtool for a few days, followed by brushing all the gunk off, followed by soaking again and scrubbing one last time. Rods got a similar treatment. Bearings and journals looked surprisingly nice. 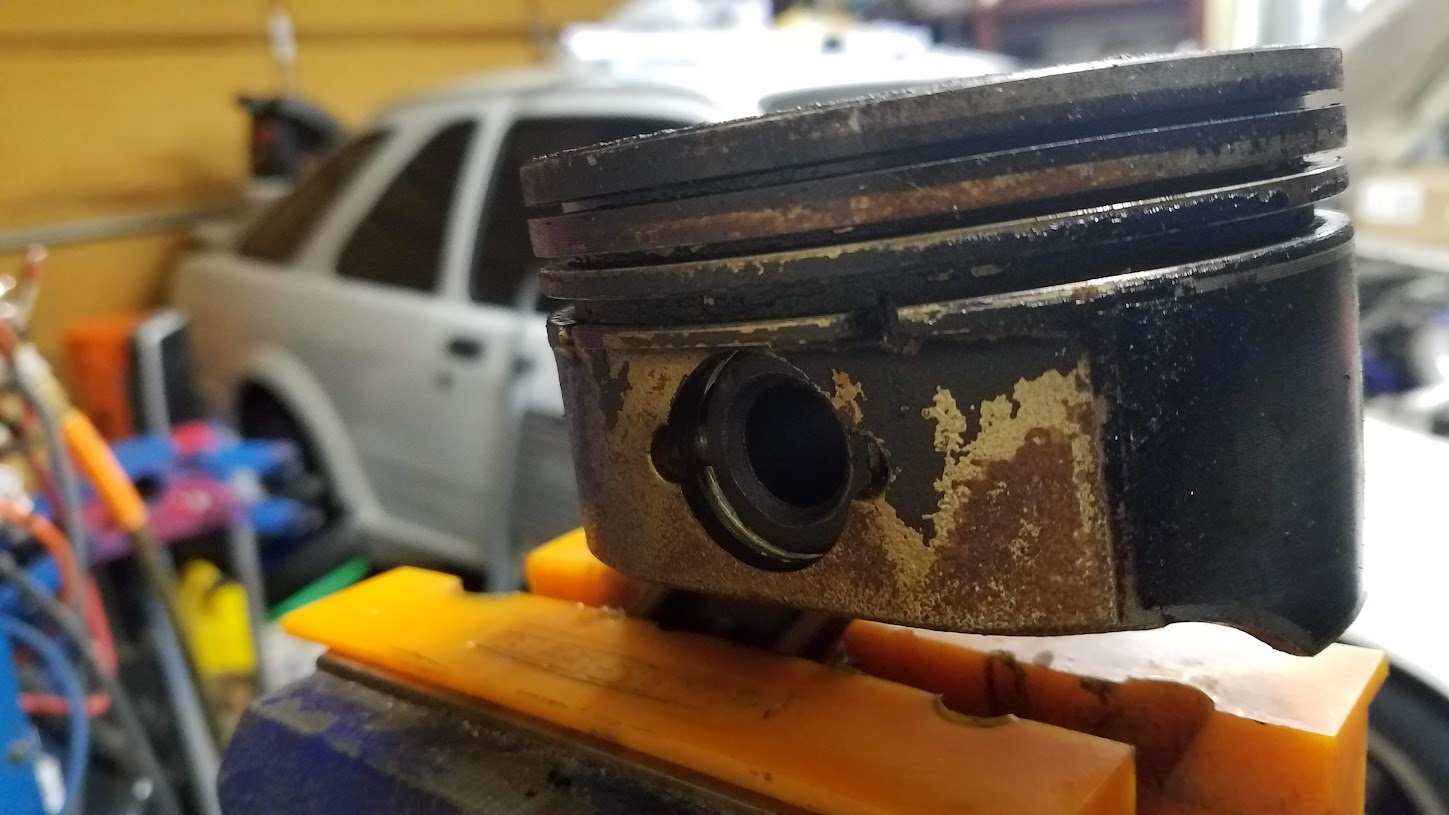 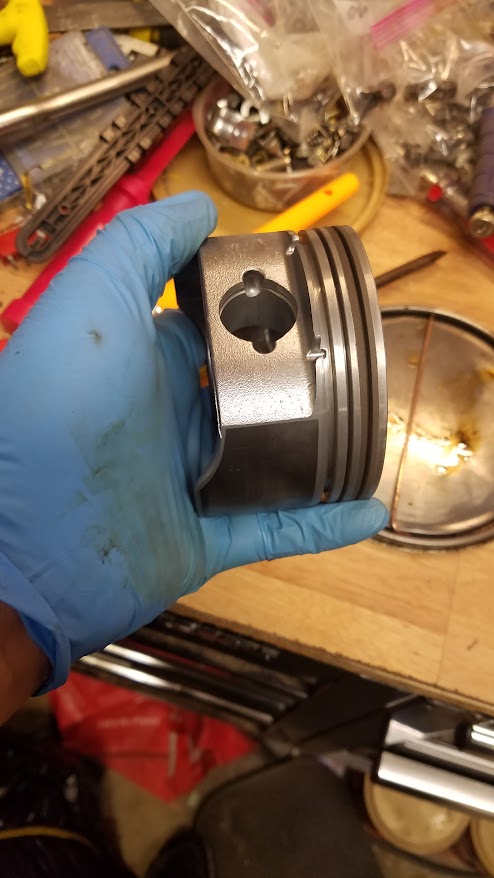 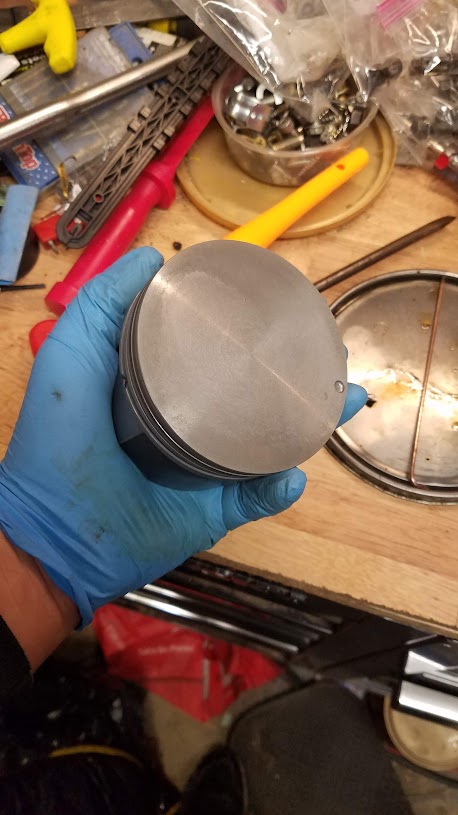 Crank shoved in my lathe for final polishing after being picked up from the shop: 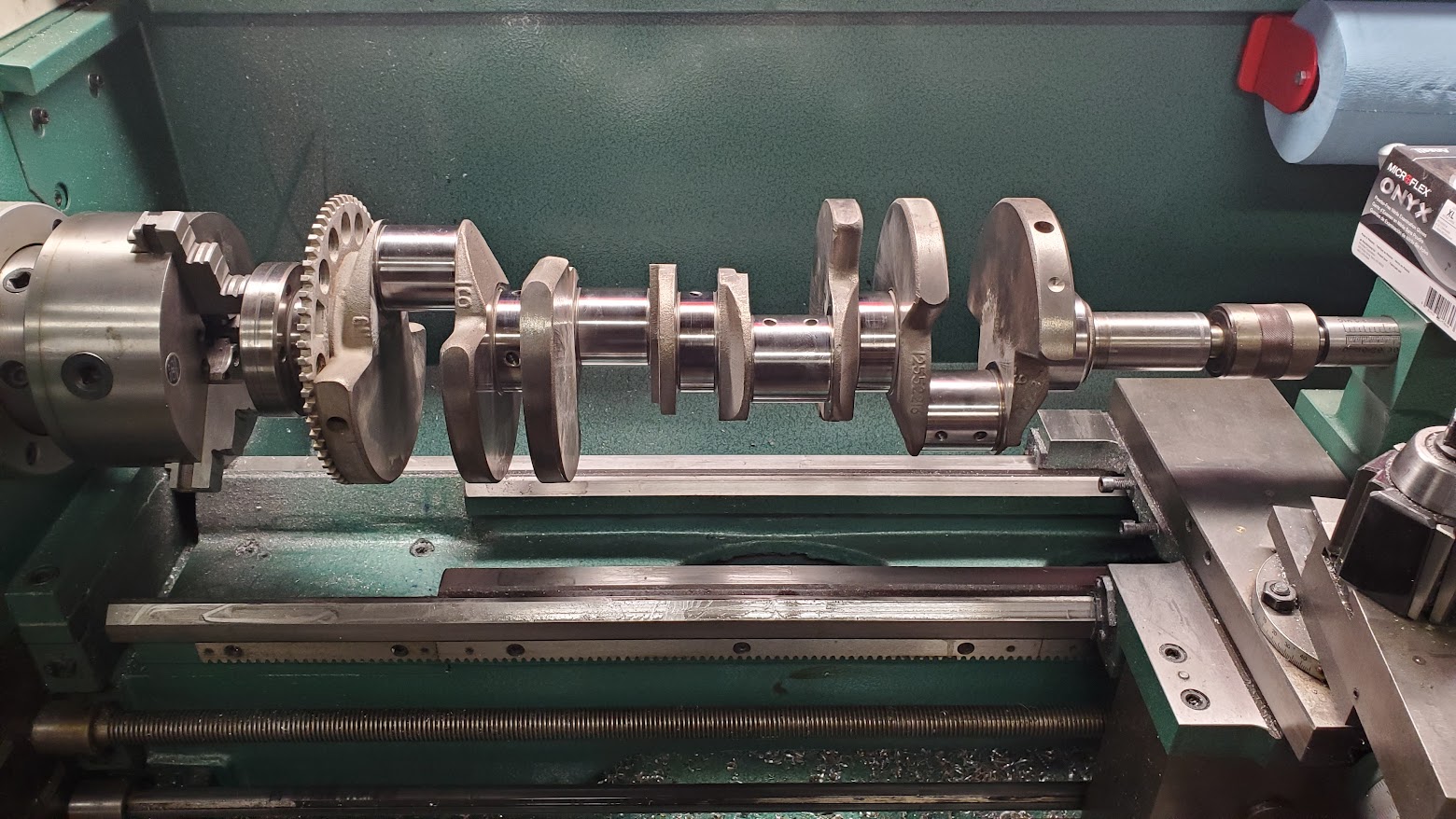 I had the shop cut a 3/16" keyway in the nose of the crank (LS cranks are not keyed from the factory) just in case I wanted to supercharge this thing later. Of course they f@$%ed it up, this is what I got back (can you say "crooked" and WTF were you guys thinking?): 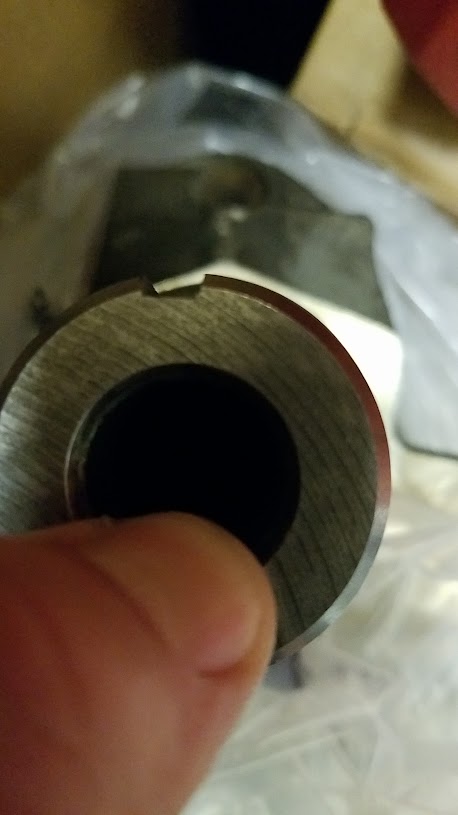 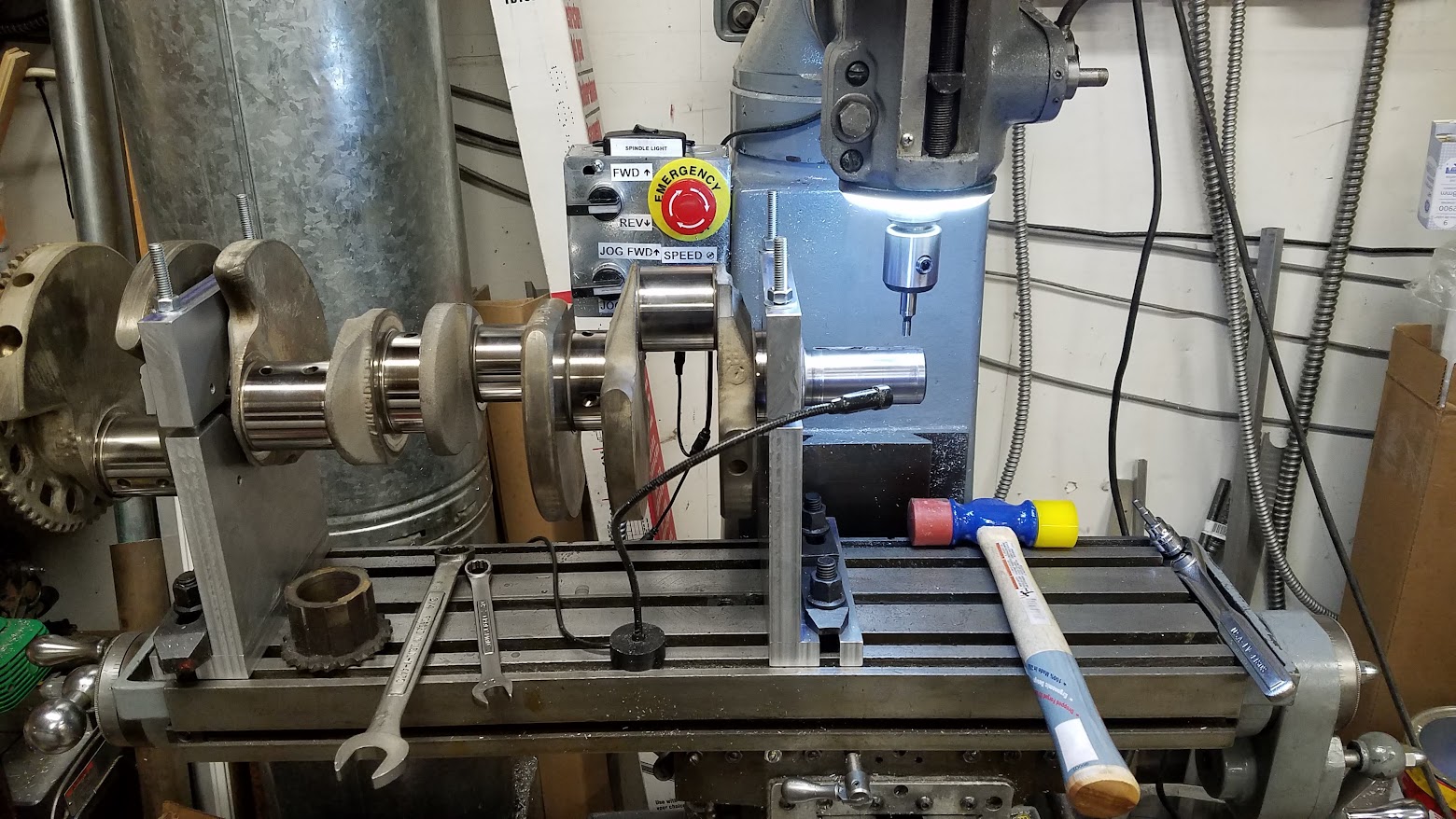 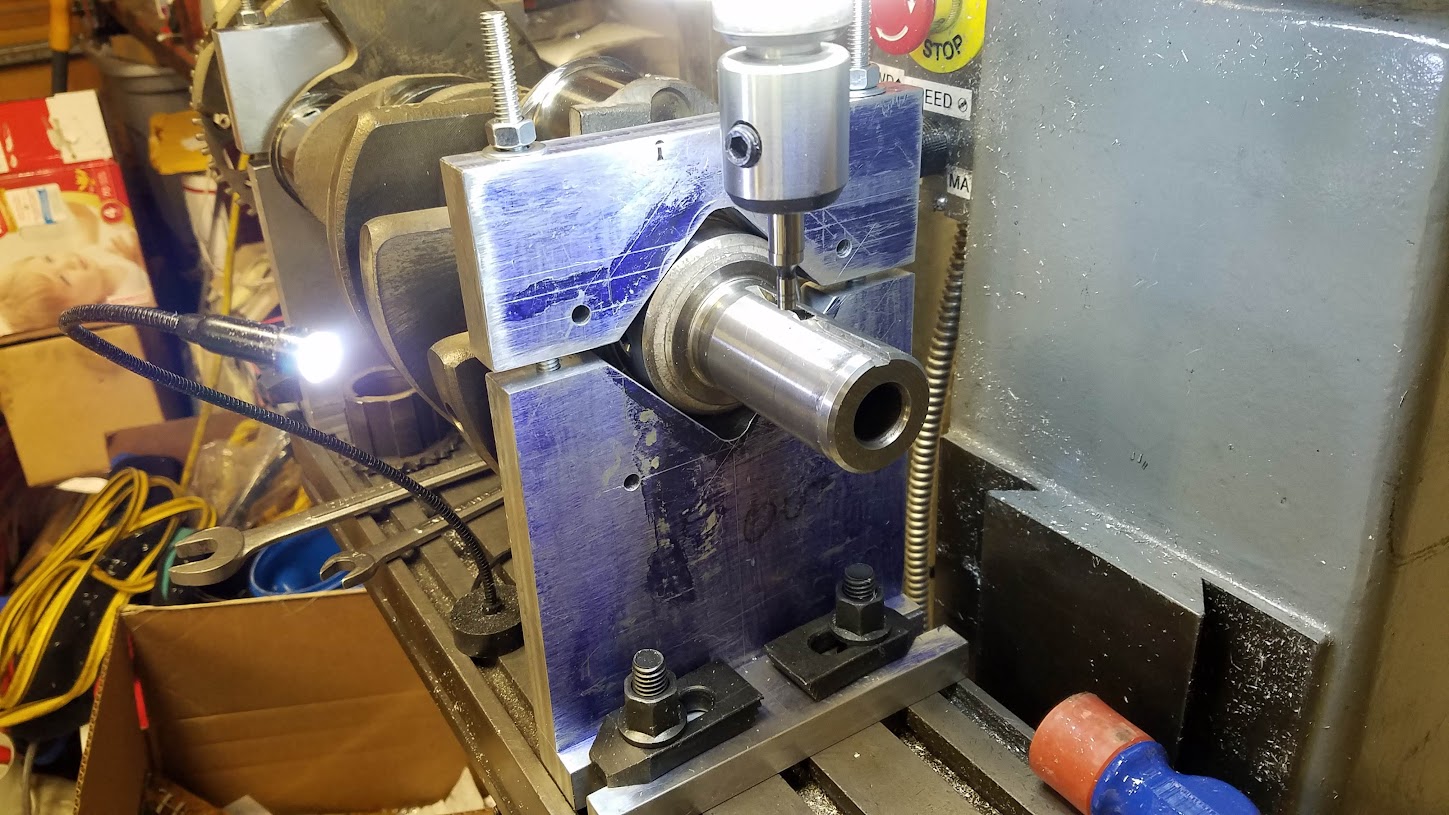 Block was back from jet wash and having new cam bearings installed. I ended up honing the cylinders so the new rings would have a good break in surface. I washed the block with hot water and soap and wiped the bores with clean towels and ATF until they came out clean: 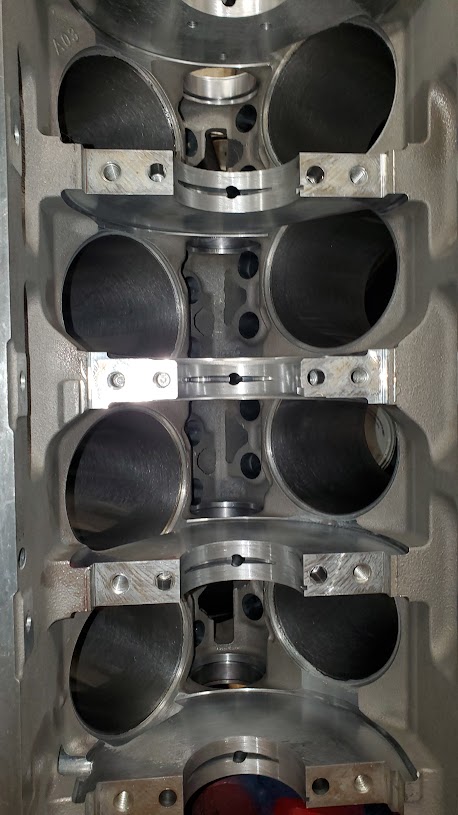 Short block assembled using new GM rod bolts, LS 1/6 windage tray and an oil pickup that came with the Autokraft LS swap oil pan. I purposely set the new ring gaps a little on the loose side in case I want to go to forced induction later: 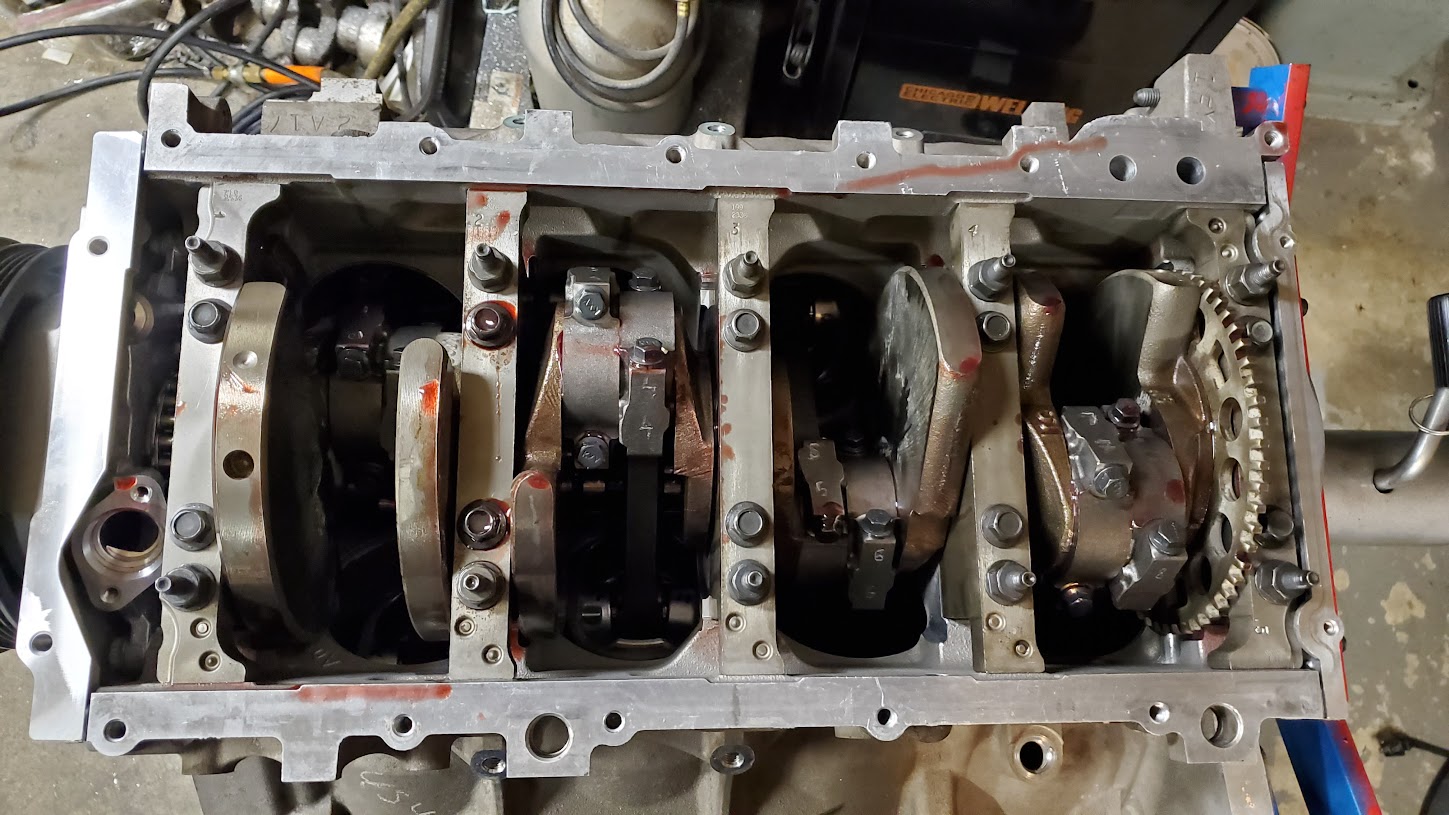 The aforementioned Autokraft oil pan, a really nice piece featuring road race style baffling (Thanks to Brett Botell, aka LS2XR4 for the help!): 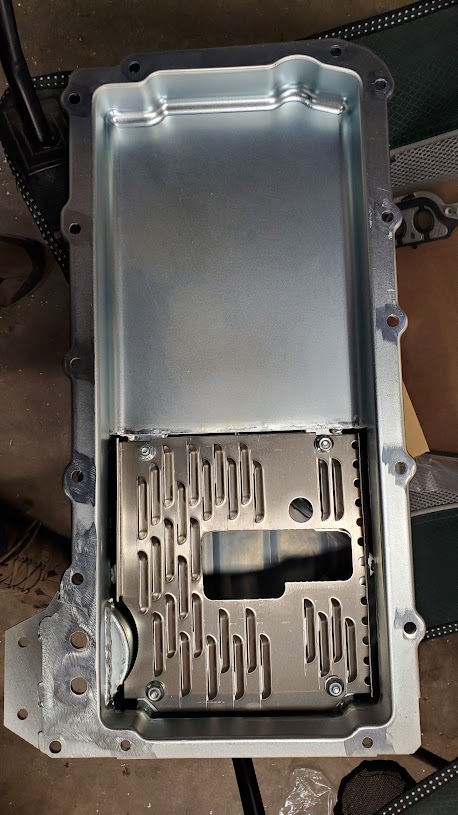 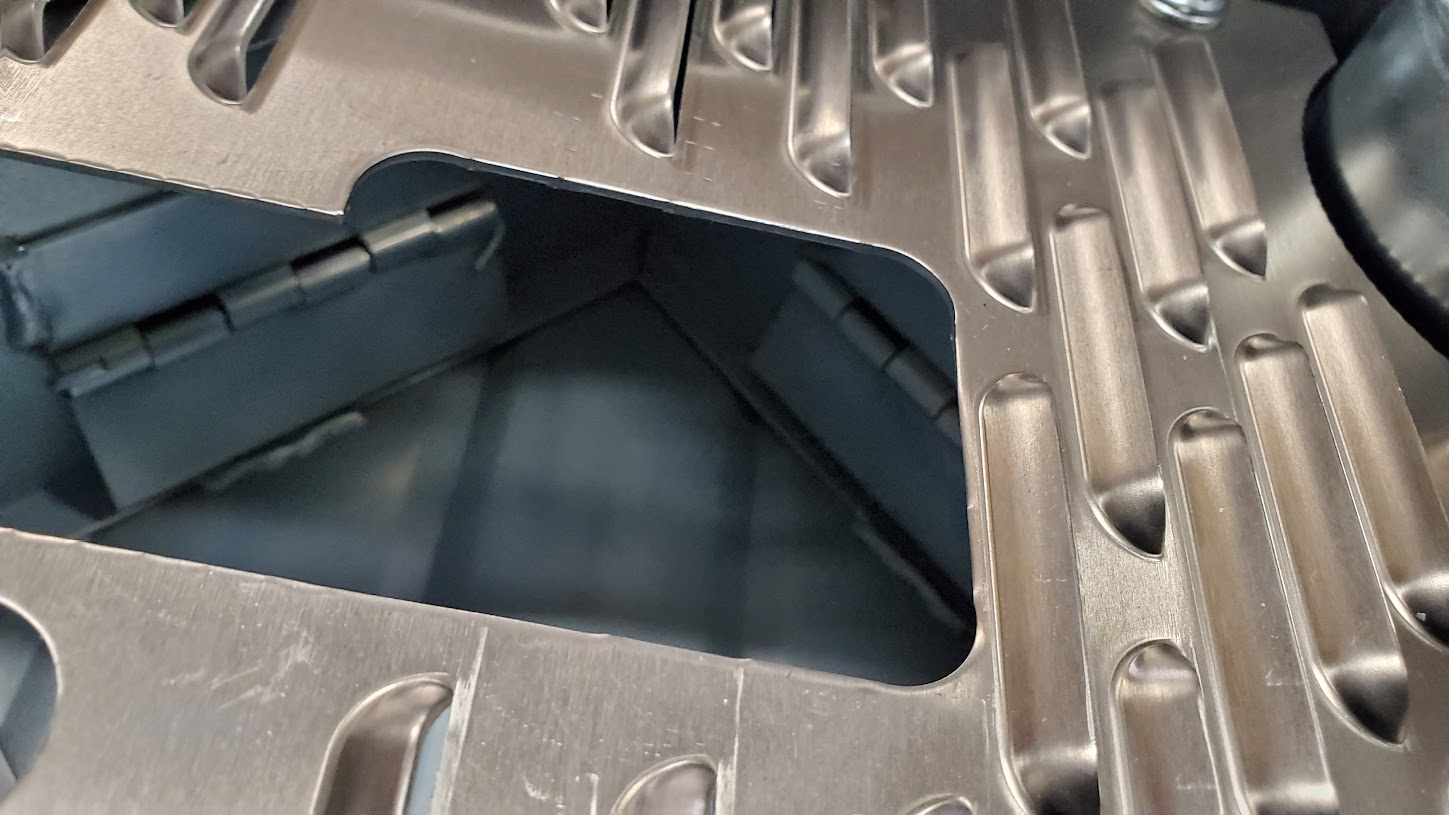 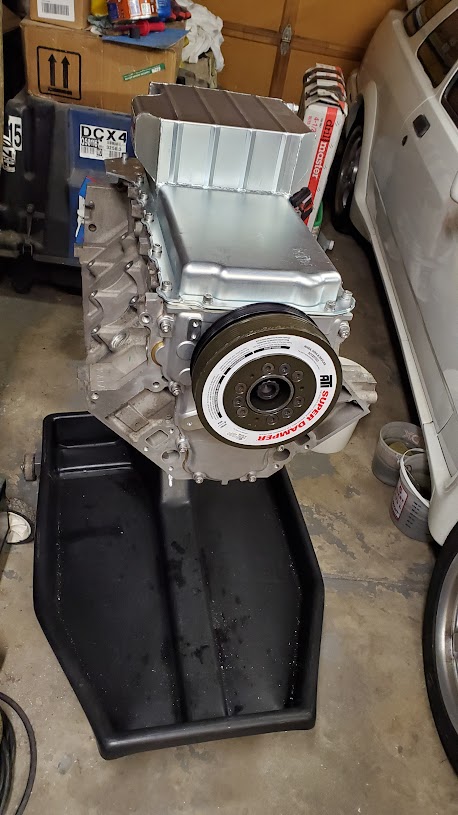 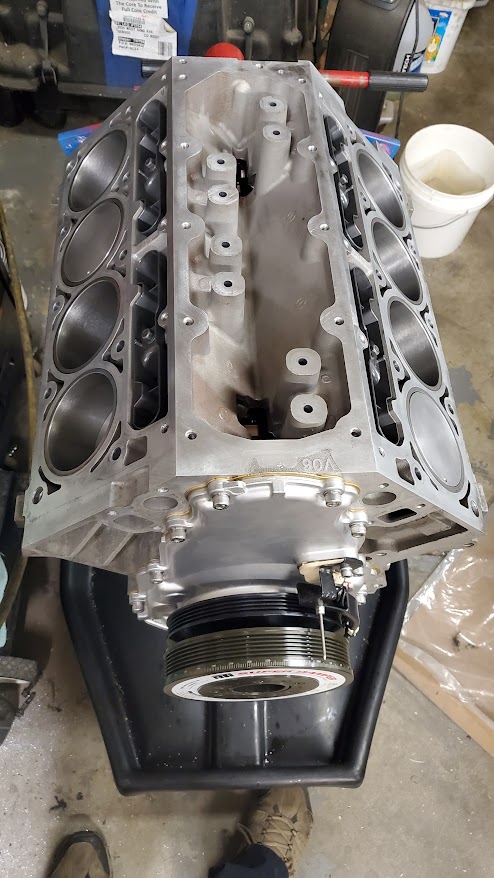 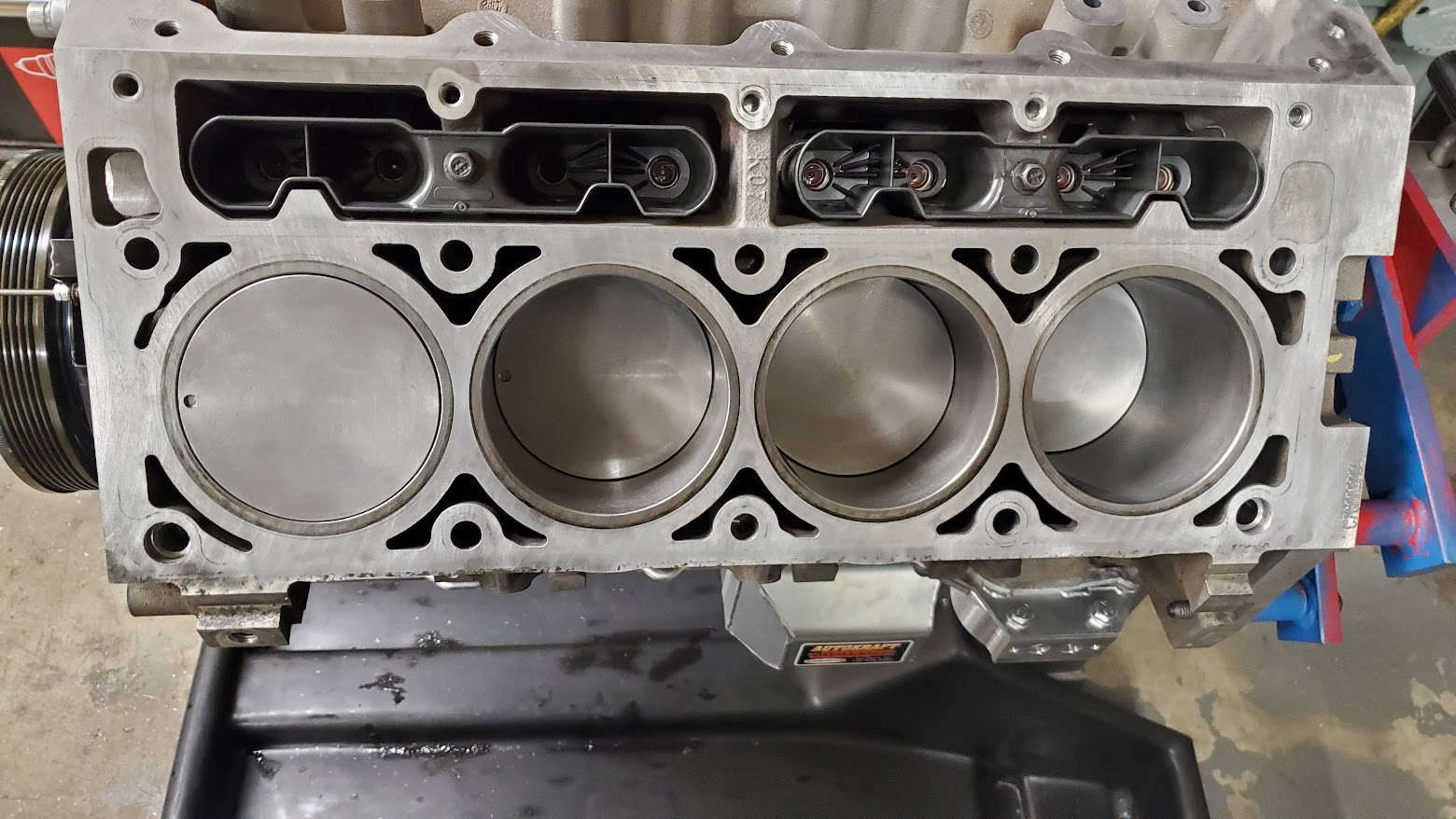 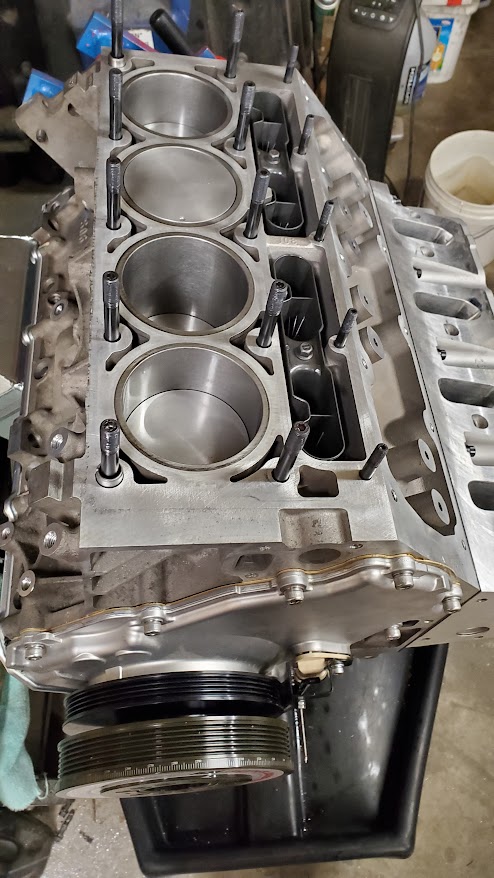 Now it was time for the heads. Apparently the stock LS rockers have some issues with the needle bearings coming apart at high mileage/high lift/high rpm situations, so I installed a Straub Technologies bronze bushing kit in them. I also opted for ARP rocker bolts just to be sure things stay together. The local shops wanted around $500 to recondition the stock heads. Texas Speed was running a Black Friday special for their stage 2.5 big valve/CNC porting/rebuild service at about $900, so that was a no brainer. I had already bought their high lift double sping/titanium retainer kit when I was gathering the initial batch of parts. Cam is a Texas Speed custom cam 220/224 600/600 116+4 . We'll see how well it works, I asked them to spec a cam with good street/emissions manners. Whole thing is rounded out by LS7 lifters and Texas Speed 7.400" chromoly pushrods. 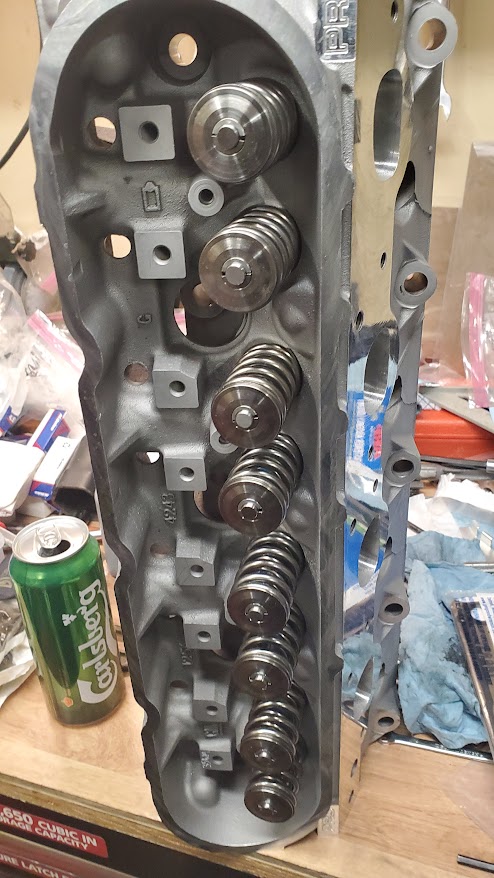 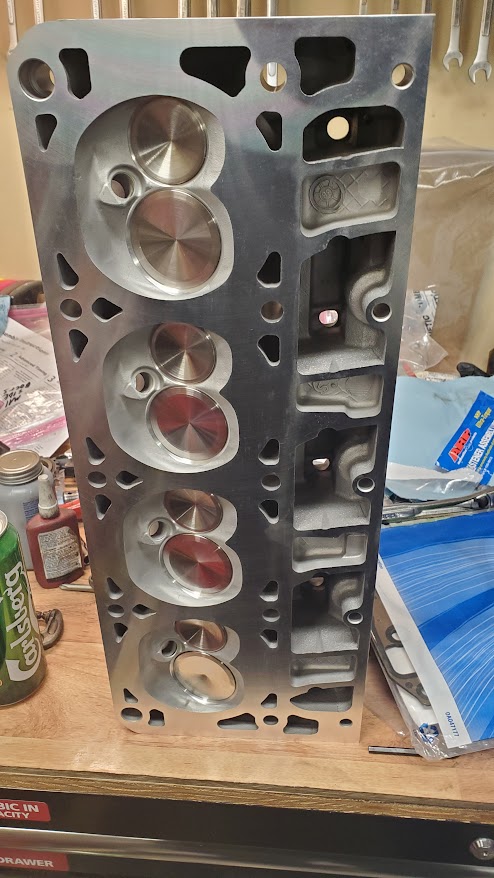 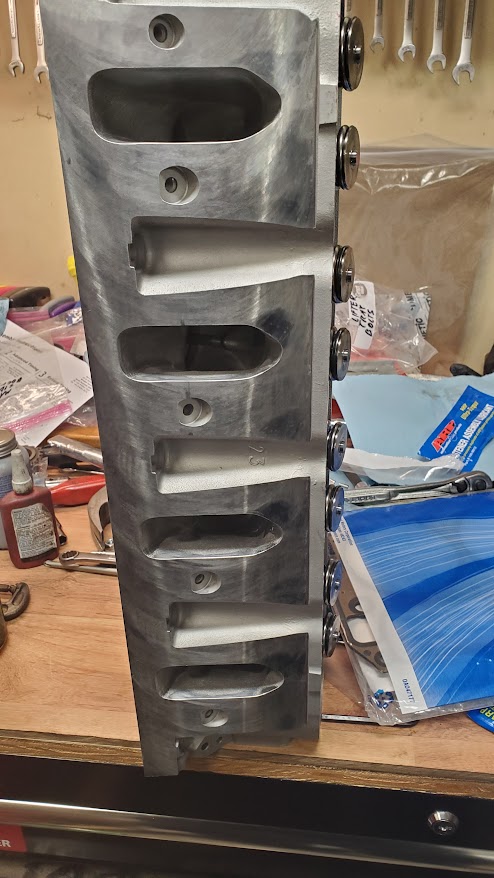 Stock rockers with the bearings pressed out: 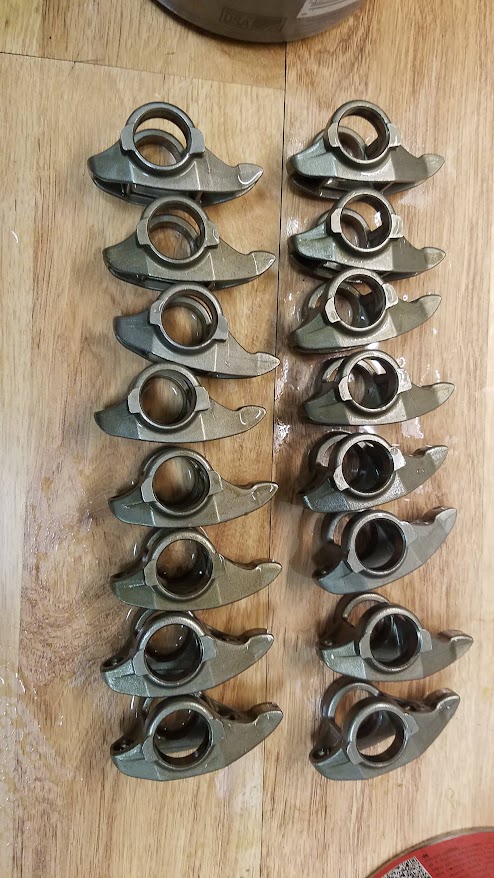 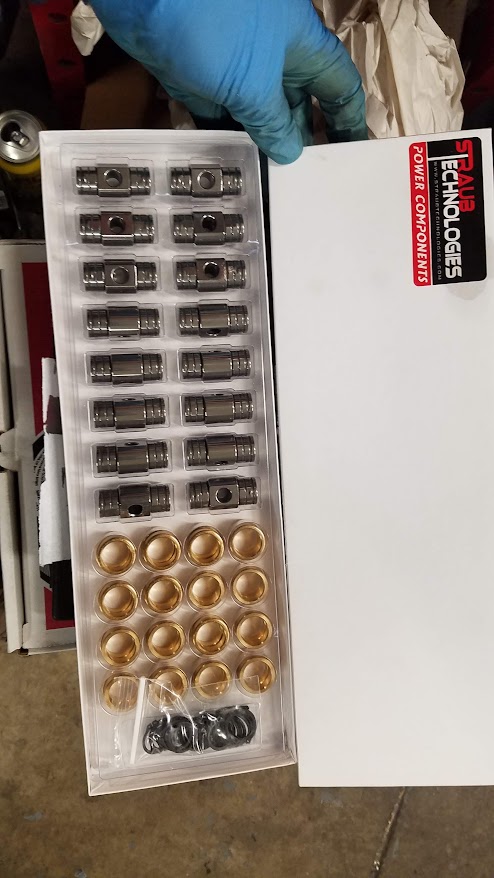 Long block done. I originally bought an LS6 intake, but then scored a TPIS modified LS6 intake which basically has a 90mm snout grafted in place of the original 78mm throttle opening. 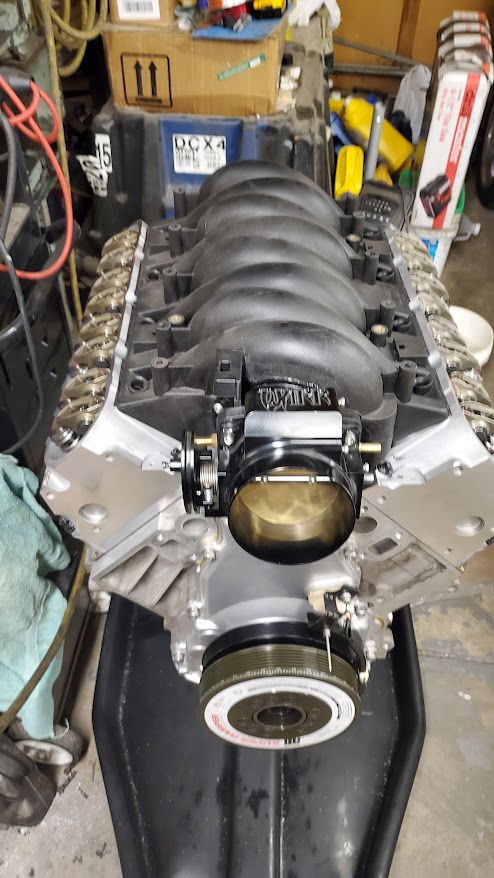 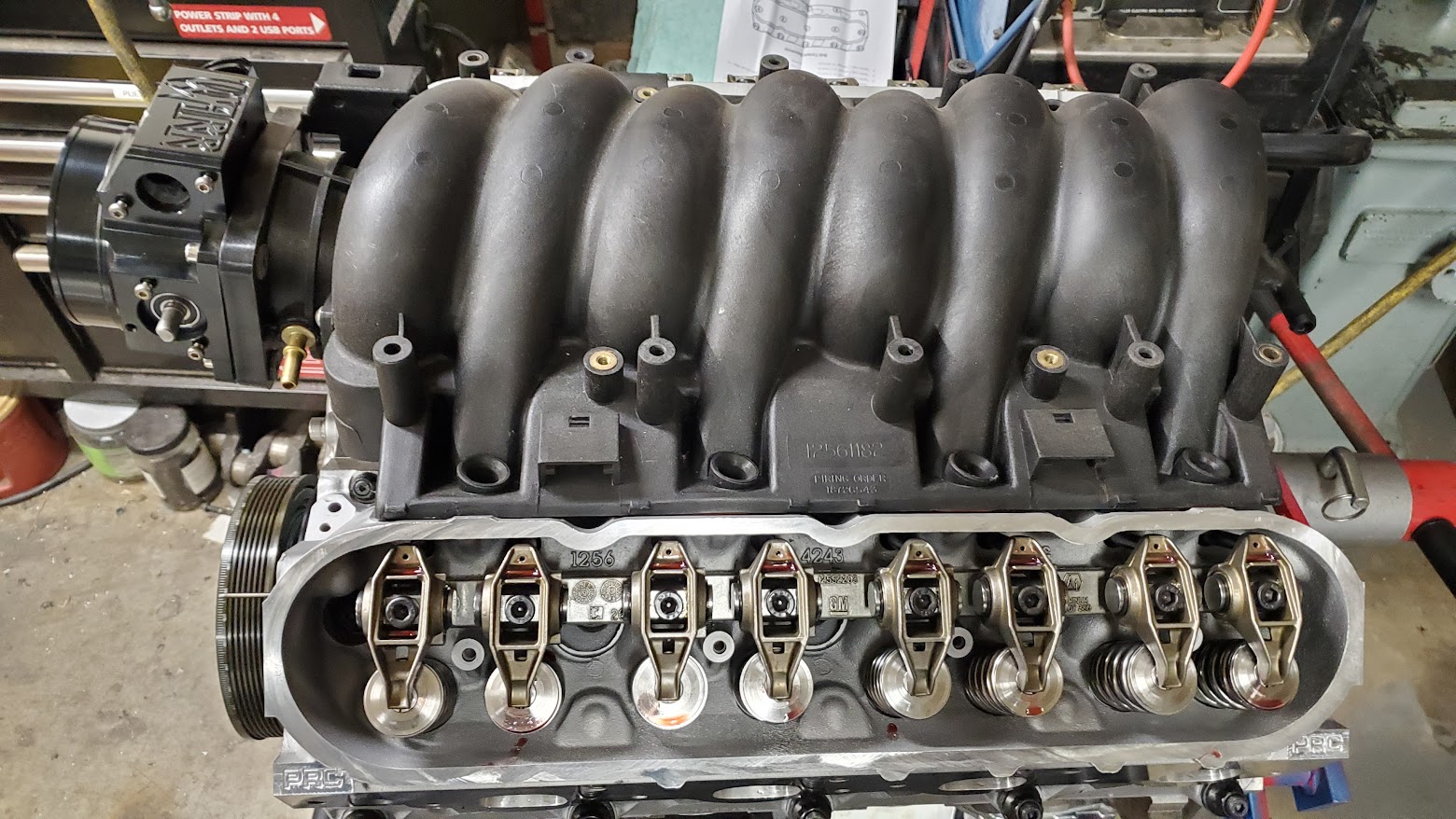 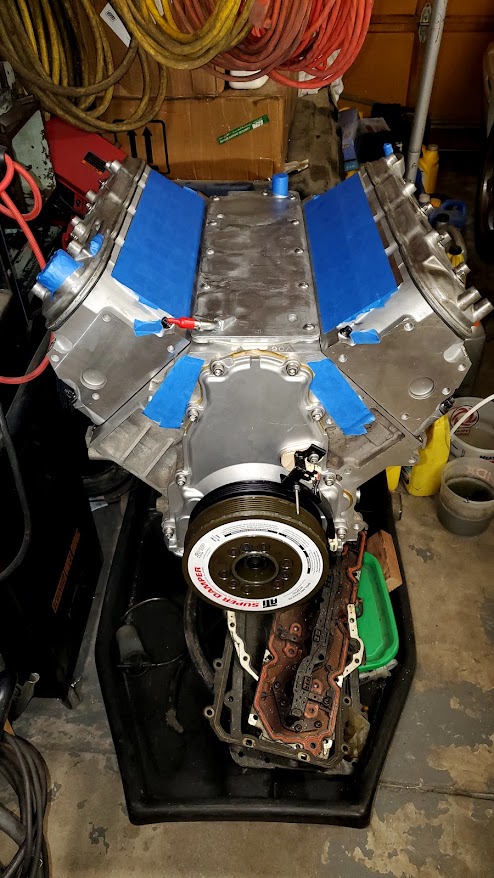 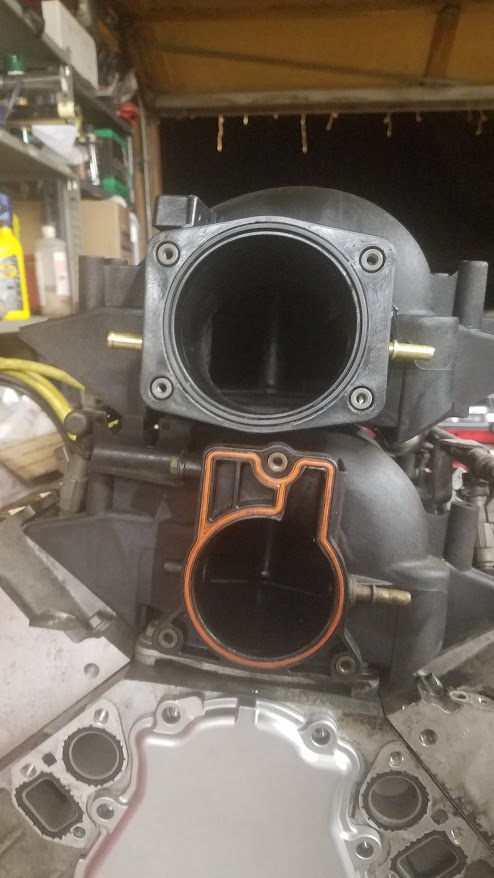 I'd love to see the pictures, but they're not showing up for me.
Mark
Top

How about now? Sharing pics from Google Photos is a pain. I wish Photobucket wouldn't have gotten greedy...
'85 XR4Ti: 8.8+T56 swap, AEM standalone, HY35 on a full rebuild... What's the bluebook on these cars again?

If you were to get a Chevy truck, say 2000-2010 with V6 or small V8, are there any certain ones to avoid? I heard when they got the 4/6/8 stuff they started to suck. After the truck was rusted out from NE Ohio salt I would possibly drop it in an XR. I've never heard of some of that stuff you mentioned the way you hear all about Ford Triton engines and cam phasers/chain guides tensioners etc.
"Let me go get the keys to your brand new Hyundai!" Nooooooooooooooooooooooooooo!
Top

andyofcolumbusmerkur wrote: ↑
Thu May 28, 2020 9:40 pm
If you were to get a Chevy truck, say 2000-2010 with V6 or small V8, are there any certain ones to avoid? I heard when they got the 4/6/8 stuff they started to suck. After the truck was rusted out from NE Ohio salt I would possibly drop it in an XR. I've never heard of some of that stuff you mentioned the way you hear all about Ford Triton engines and cam phasers/chain guides tensioners etc.

Not sure on a V6 since I never really looked at them. I'd avoid the LS1, especially the early ones as the cylinder liners are very thin and can only take a ~0.005" overbore which is nothing. The AFM system first showed up in Gen IV LS motors, it works by deactivating the valves on 4 of the 8 cylinders (they only go from 8 to 4 and back, never 4-6-8 - that was an old system used on Cadillacs in the 80's). When the system works well it's actually not bad (I have it on my 2008 Grand Prix GXP with the 5.3L LS4 and it will hit almost 30 mpg if I baby it on the highway around 60), but the AFM lifters have a tendency to collapse after around 100k miles. Their VVT system seems to be fairly problem free. The Gen IV LS actually has some improvements over the Gen III, main one being stronger rods along with the 58x crank reluctor. There really aren't any chain guides to worry about, the only thing I used is an LS2 chain damper. The timing sets are a dime a dozen for around $100 (vs $500+ on a DOHC mod motor).
'85 XR4Ti: 8.8+T56 swap, AEM standalone, HY35 on a full rebuild... What's the bluebook on these cars again?