I've seen this mentioned a few times in the past as a possible replacement, but has anyone actually used one of these? It appears there are two slightly different versions, part number 46 13 881 for a 1986-1991 9000, and 50 46 362 for a 1992-98. The early cars used a quick-disconnect system on their heater cores and apparently that made them prone to failure, hence the revision starting in 1992. Indeed it's the '92+ version we'd want, which I think is all that's sold today (more on that later).

The only reason to go this route is because you can get an all-Aluminum unit, inclusive of end-tanks and nipples. Available new for the (sit down first), bargain price of $319.99
https://www.eeuroparts.com/Parts/5206/H ... swodG-EOHg

You can find lots of replacements available with plastic end-tanks, but I have no interest in that. You should just go with a stock replacement from one of our sponsors and not have to worry about any custom fitment issues.

If you're junkyard shopping, it's possible that you might come across an all-AL version. In fact, you're probably more likely to come across one in an early car, as many of the original will have leaked and been replaced with the later version (a retro-fit kit is sold to fit the later one in an early 9000).

I now have one of the all-AL ones, part# 50 46 362 barely legible. I plan on installing it soon - just drained my coolant a couple days ago when removing the head.

I'll post details in this thread, but if someone wants to beat me to it, feel free.
Brad
Top

What year was your car?
Brad
Top

Did you ever need to replace the cores in the '94 or '96? Those would have had the "new & improved" part.
Brad
Top

I looked at this core, but the hose connections seemed a little too short.
I ended up adapting a Toyota core, as I suspect you recall. Saves at least
a couple hundred dollars if someone's willing to do some cutting and
soldering.
Ken
Scorpio Goodness!
Top

Stock heater core I took out of my care had plastic end tanks........

Stock radiator in my car has plastic end tanks.......

Don't see the need to reinvent the wheel.
Top

So yesterday I thought I'd give it a go at fitting the all-AL Saab 9000 heater core. I'm thinking this is going to be much more involved than I thought, as it would involve re-fabricating the heater box to accommodate the larger core. It's not entirely impossible, but probably more effort than is worthwhile.

If after 30+ years your current heater core starts leaking/gets plugged, why not to buy new one for and not have to worry about it in your life time again?

ford.scorpio wrote:If after 30+ years your current heater core starts leaking/gets plugged, why not to buy new one for and not have to worry about it in your life time again?

Despite my disdain for plastic end-tank heater cores, replacing with a stock core is increasingly looking like the best solution overall. Perhaps they even made some improvements in the later units and they don't have such tiny passages that become easily clogged? That was my other reason for wanting to fit the Saab 9000 core.
Brad
Top

$72 seems like a small price to pay for a do it once and be done with it item.
David Reese

DAReese wrote:$72 seems like a small price to pay for a do it once and be done with it item.

Well, had the 9000 core worked more easily, it would have been a "done once and better" solution. That was my reason for considering it.
Brad
Top 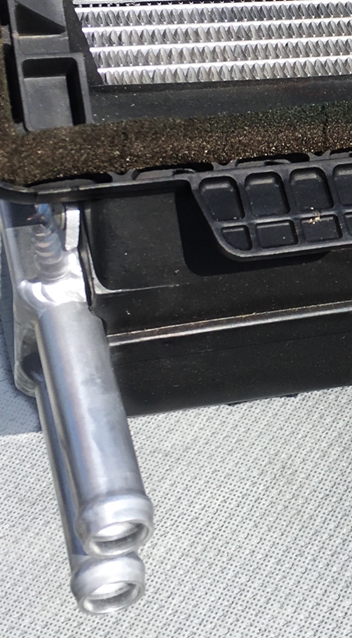 Like the Saab 9000 one, but about a third of the price.
Also direct bolt in to any XR / Scorpio.
-Mike

Better hurry up Mike, I'm starting to actually get this car together and don't want to rip out the dash again. Looks like a custom piece like your radiators. I'm happy you're having this done.
Tim Spencer
1988 XR4Ti Duratec project car
2011 Taurus SHO daily driver...not stock.
Top

timxr8 wrote: ↑
Tue May 07, 2019 6:27 pm
Better hurry up Mike, I'm starting to actually get this car together and don't want to rip out the dash again. Looks like a custom piece like your radiators. I'm happy you're having this done.

You are correct...and...they're done. Tricky to get them right, but I'm happy with the results.